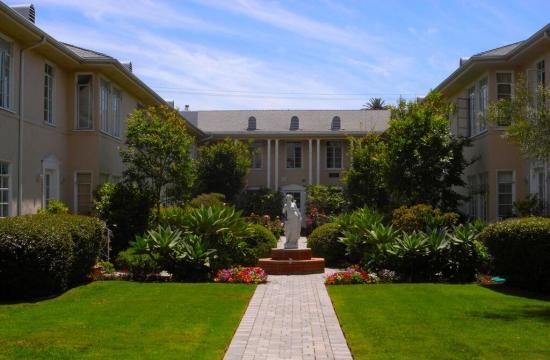 The move was recommended by the Landmarks Commission.

According to the City, San Vicente Boulevard, between Ocean Avenue and 7th Street, contains the City’s largest extant grouping of apartment buildings dating from the mid-20th Century, constructed between the late 1930s to the 1950s. Although a variety of architectural styles of this era are evident, almost all incorporate a landscaped courtyard open space in their design and setting, giving this area a unique identity that exemplifies the City’s residential history during the boom years of the pre- and post-World War II era. The adoption of the attached ordinance protects this chapter of the City’s history and creates the City’s third and largest historic district.

The new Historic District is composed of a total of 40 properties, 26 of which are contributors with the remaining 14 as non-contributors. The City’s Landmarks Ordinance (Municipal Code Chapter 9.56) describes certain benefits and preservation incentives to be afforded to“contributing” properties located within designated historic districts.

This ordinance also temporarily provides additional benefit and incentive to the non-contributing buildings within the Historic District in the interim while a supplemental ordinance that describes a regulatory review procedure to govern the review of proposed alterations and/or modifications to all properties within the Historic District is developed and codified at a later date.