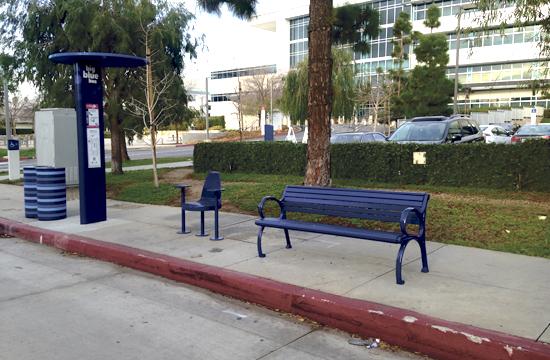 Less than 10 months after Santa Monica City decided to rip out most of the metal bus seats at City bus stops as part of an-almost $8 million initiative, the simple four-seaters are making a stealthy return; six bench seats have reappeared in Santa Monica over the past 10 days, complete with a fresh coat of blue paint.

According to Santa Monica City Councilmember Kevin McKeown and Recreation & Parks Commissioner Phil Brock, Big Blue Bus (BBB) initiated the return of the bench seats in response to a groundswell of community backlash against the single-seat program.

“The Big Blue Bus has begun a pilot project at six heavily-used bus stops to reintroduce bench seating,” McKeown explained. “This is in addition to the modifications that continue to improve seating at all stops, such as backrests and armrests. “

Public forums and grass-root sentiment in Santa Monica has seen residents complain about the single seats that began replacing benches across the city mid last year as part of the Bus Stop Improvement Project (BSIP). “Artistic canopies, seating and real-time arrival information coming to a bus stop near you,” according to BBB.

“I hate the little stools!,” Suzanne Robertson posted on Facebook. “I have a 19-month-old grandson who is active, fast, can’t sit still and loves to watch buses. I want to take him on a bus ride on the Big Blue Bus but I am afraid to because I can’t hold [him] while he sits on a stool 18 inches away from the stool I am sitting on,” she posted.

Welcoming the return of the bench seat, Robertson’s comments are echoed by many.

“That is what they should have done in the first place,” posted Laura Wilson, “and used the 7 million they wasted to install efficient real time notifications for all to see and know when the next bus is coming.”

Many of Santa Monica’s old silver benches are being installed at BBB stops in Los Angeles, LA county and Culver City, Brock stated.

“I am pleased that at least some of the bus stops will have benches,” commented Santa Monica City Councilmember Sue Himmelrich. “Hindsight is always 20/20, and while I do think the grant for the bus stops should have been vetted more thoroughly for design, I always try to move forward and prevent something like this from happening again.”

While Himmelrich was not part of City Council who voted in the new designs, some who were say that there is need for both the single and bench seat options.

“We have a mix of seating choices, some with protective canopies. Some of the major stops have bus arrival info displayed,” commented Councilmember Pam O’Connor. “If you look at the way people use the benches you’ll see that seldom do four people sit next to each other on the benches.  Rarely do three people. Most usage is two people with space between,” O’Connor added.

The new-old four-seaters can be found at these Santa Monica locations:

The “return of the benches” pilot program will last six months, according to McKeown, with their future depending on community feedback.