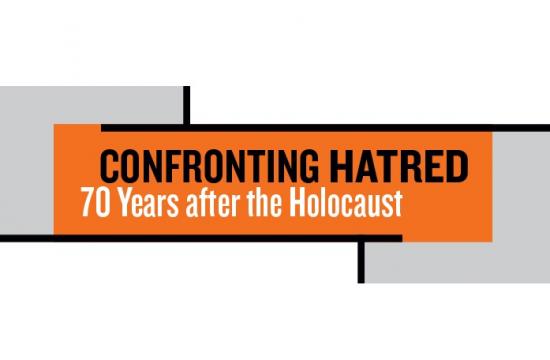 What do a Nobel laureate, a former skinhead, an imam and a heavy metal singer all have in common?

They are the influential voices in “Confronting Hatred: 70 Years after the Holocaust,” an hour-long radio special created by the United States Holocaust Memorial Museum as part of the Museum’s ongoing effort to foster greater understanding of the relevance of Holocaust history today.

The documentary special aired on KPCC, 89.3 FM on Friday, Jan. 1 at 11 a.m., International Holocaust Remembrance Day, an international memorial day is on Jan. 26. The program can also be heard on the Museum’s website at ushmm.org/confronting-hatred as well as on iTunes.

“‘Confronting Hatred’ featured an amazing array of people from diverse backgrounds talking from their own hearts and their own experience about how they have addressed hatred in their own lives, and how they’ve tried to combat it,” says Aleisa Fishman, a historian for the Museum’s initiative on Holocaust denial and antisemitism. “The Holocaust was the ultimate manifestation of unchecked hatred. We hope listeners will gain a deeper understanding of the subtle and overt ways in which we are confronted with hateful ideas and how people can take action against them.”

This radio program brings together a broad range of voices to talk about racism, antisemitism and the ways in which hatred can grow. Listeners will hear personal stories from a former skinhead, an imam and a prosecutor for the Rwandan genocide trials — as well as heavy metal singer David Draiman, filmmaker Errol Morris and Holocaust survivor and Nobel Peace Prize recipient Elie Wiesel.

The documentary examines the ways in which the Holocaust continues to inform contemporary discussions about hate speech, propaganda and human rights.

Other participants involved include:

● Christopher Browning, professor emeritus of history at the University of North Carolina at Chapel Hill

● Gregory Gordon, director of the Center for Human Rights and Genocide Studies at the University of North Dakota

● Imam Mohamed Magid, immediate past president of the Islamic Society of North America and imam of the All Dulles Area Muslim Society Center in Sterling, Va.

“Confronting Hatred” is based on the long-running Voices on Antisemitism podcast series produced by the Museum and generously supported by the Elizabeth and Oliver Stanton Foundation. Listen to more than 100 episodes here: https://itunes.apple.com/us/podcast/voices-on-antisemitism/id204816557?mt=2.