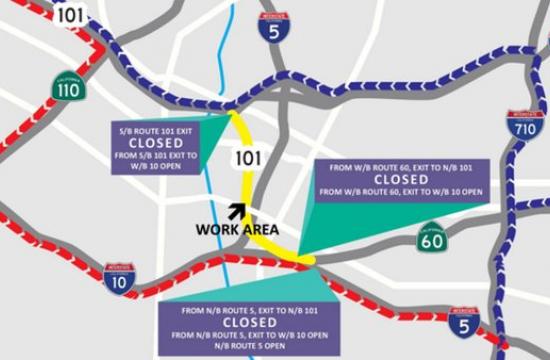 With demolition beginning tomorrow on the Sixth Street Viaduct, drivers will need to take detours around a 2.5-mile stretch of the Hollywood (101) Freeway near Boyle Heights and downtown Los Angeles that will be closed for 40 hours.

A 220-foot section of the bridge over the freeway will be removed during the closure, which will stretch from the Santa Monica (10) Freeway split to the interchange of the Golden State (5), 10 and 101 freeways south of downtown Los Angeles.

Nicknamed by city officials as the #101SlowJam, the closure is scheduled to begin 10 pm Friday and end 2 pm Sunday.

On-ramps will also be closed for northbound on-ramps at Sixth Street/Whittier Boulevard, Euclid Street and Soto Street; and the southbound on- ramps at Los Angeles, Commercial, Mission and Fourth streets.

Detours around the closure area are detailed at http://www.sixthstreetviaduct.org .

Mayor Eric Garcetti said last week the city will ensure there are "clearly marked" detours and "the highest standards of police and fire response throughout the weekend."

Councilman Jose Huizar urged residents in downtown Los Angeles and Boyle Heights to plan ahead for the closure.

"As we say goodbye to our old Sixth Street bridge before welcoming in our new bridge and public space, this is a necessary step to ensure the public’s safety and begin the work at hand," he said.

The deteriorating Sixth Street Viaduct will be replaced following a nine- month-long demolition.

The viaduct itself will be closed to traffic starting January, and construction is expected to last until 2019.