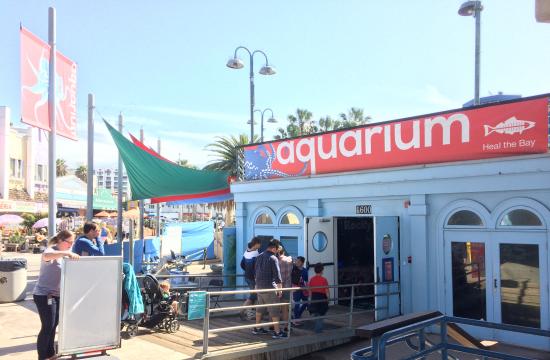 Families and ocean enthusiasts alike had a whale of a time this past Saturday and Sunday at the Whale of a Weekend, hosted by Heal the Bay and Santa Monica Pier Aquarium. The event marks the annual migration of the Pacific gray whale, which circles the arctic and Baja California, taking the whales past the pier.

Interactive activities were set up for children who, in addition to exploring the various sea creatures the pier has on display, could engage in whale related arts and crafts, view fun facts about whales on display throughout the aquarium, as well as take part in experiments providing insight into whales’ survival mechanisms.

The centerpiece of the event on Saturday, February 20, was a talk by environmental reporter David Neiwert on his new book “Of Orcas and Men: What Killer Whales Can Teach Us,” which traces the long history of human interaction with Orcas and serves as a testament to what he calls “the sense of awe that these creatures inspire, both in an experiential way and in a purely intellectual one.”

Jenna Siegal, public programs manager for Heal the Bay at the Santa Monica Pier, felt that Neiwart’s experience fit her organization’s mission to advance knowledge of and appreciation for ocean life.

“I thought it would be a great way to introduce people to one of the marine mammals that not many people know much about and everyone’s entranced by,” Siegal said.

Having recently spoken out in favor of a bill by California Congressman Adam Schiff that would end SeaWorld’s Orca breeding program, Neiwert wanted to ensure that Southern California’s pro-marine life communities understood the importance of protecting these mammals.

“As much as the book has been a success in the Pacific Northwest,” Neiwert said, “there’s an important role that Californians can play when it comes to preserving their wild populations as well as reforming the ethics that permit for their captivity.”

For upcoming events at the aquarium head to: healthebay.org/aquarium