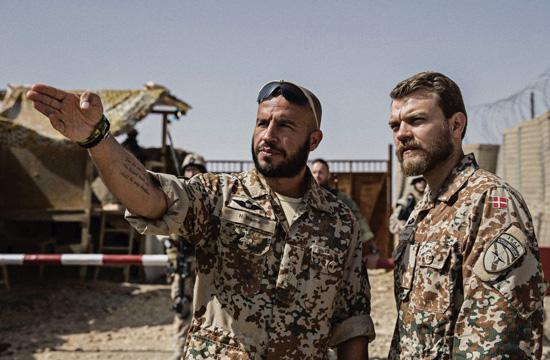 “A War,” written and directed by Tobias Lindholm, is a brilliant, visceral, heart-thumping look at the realities of war as experienced by a troop of Danish infantry soldiers stationed in a remote Afghan province. Their obvious presence is meant to reassure the locals that they are there to protect them from the Taliban. Under the company commander Claus M. Pedersen, wonderfully brought to life by Pilou Asbæk, who gives a powerful, multi-layered, mesmerizing performance, the unit executes routine daily patrols. Always in danger of stepping on a roadside bomb or encountering enemy fire, they move stealthily with the utmost of caution.

One day on such a mission a man who appears to be in great stress approaches them. After searching him to make sure he is not carrying any weapons, he beckons for them to follow him. Again, with eyes surveying the landscape to be sure they are not being led into a trap, they enter his hovel of a home where his young daughter is suffering from severe burns. The medic treats the wounds the best he can, instructing the mother to clean them daily with water and to change the bandages. The entire family shows up at headquarters the next day. Fearing for their lives because they allowed their daughter to be treated by who the Taliban considers to be the enemy, they beg the commander to let them stay at their camp. Unable to grant their request, Commander Pedersen tells them they must go back home with assurances that his unit will protect them – a promise he may or may not be able to fulfill.

Once again on a routine mission, the unit is suddenly caught in heavy crossfire and an intense gun battle ensues. The squad is pinned down and is clearly outnumbered. They desperately need air support and here’s where decisions get a bit tricky. Command headquarters will not authorize air support unless Pedersen can confirm exactly which building the gunfire is coming from. Under great pressure to save his men, some of whom have been shot, he makes a split-second decision that has devastating results both on the target and on the commander and his family, who we get to see when he goes home on leave. His wife Maria, sensitively played by award-winning Norwegian actress Tuva Novotny, struggles as a mostly single mother, taking care of her three children who want their father to be at home with them. The domestic scenes are stirring as we see the devotion Pedersen has to his family. Eventually the commander must come before a civilian court to answer for his actions. The evidence is stacked against him and the outcome will keep you on the edge of your seat.

There is an interesting casting twist as the squad consists of only three professional actors – Pilou Asbæk as Commander Pedersen, Dar Salim as second in command Najib Bisma, and Dulfi Al-Jabouri as Lutfi “Lasse” Hassan. The rest of the unit are soldiers who actually served in Afghanistan. Given their strong performances, you would never think they were not professional actors. Perhaps being up close and personal in battle gave them an acting edge that was quite instinctive.

Under Linholm’s tight direction, and his excellent technical team, including Director of Photography Magnus Nordenhof Jønck, the film is pitch perfect beginning with the excellent script, which explores the rules of engagement, the consequences of a decision made in the heat of battle, as well as the personal and family suffering as a consequence of military service.

Lindholm’s “A War” is definitely one of the most outstanding Foreign Language Films and like Kathryn Bigelow’s “The Hurt Locker,” he shines a light on war’s devastating effects and the attendant personal consequences.