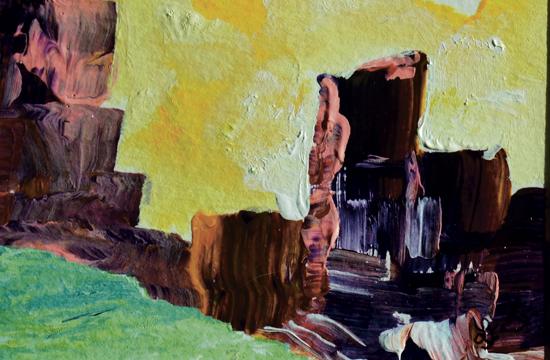 haleARTS S P A C E is extending an invitation to the opening reception of a group show featuring works by Lindley Karstens and Aline Mare. The reception will be held Friday, March 18th, from 5-8pm. The show will be available through March 30th, 2016.

Lindley Karstens was born in San Francisco in 1961, grew up in the Midwest amidst corn fields and cows, and has spent time on both coasts since then. She has been a practicing artist for over three decades.

Working primarily in acrylics and water mixable oils, Lindley’s subjects range from surreal landscapes to abstracts, stopping along the way for an occasional figurative painting. Her latest cycle of work hovers in the liminal space between landscape and abstracts, encouraging speculation on the subject and enticing viewers with flourishes of color and light. Filled with loose brush strokes and heavy applications of paint, the textural quality of these new pieces invites a closer look.

She draws inspiration from frequent travels both locally and abroad, absorbing the intimate details and large scale drama of the natural world and human ambition. Lindley currently resides on a quiet hillside with her partner, a large number of kitchen gadgets, and several fuzzy companions.

Aline Mare’s career began in the Lower East Side of Manha5an, coming out of a background of theatre, performance and installation art. She completed undergraduate work at SUNY Bu?alo’s Center for Media Studies and an MFA from San Francisco Art Institute.

“My work begins with hand painted transparent surfaces scratched and marked with abstracted gestures. Using the illumination of the scanning machine as an original light source, I combine the painted backgrounds with collected objects from the natural world.

The most recent works are all realized as large scale dye infused metal prints. The Deep Roots and Newly Seeded series (2014-2016), explore the structure of roots as a support system for plants and trees and examines the structures of seeds as a natural interface between ecology and culture.” – Aline Mare

Photographic works from the “Deeply Rooted” series and “Cloud Seeds” (2013-2015) were included in the exhibit “Age of Wonder” shown at the Turtle Bay Museum in Redding, CA., the Thoreau Center in San Francisco, The Pico House and the Mike Kelley Gallery in LA, and James Fuentes Gallery in New York