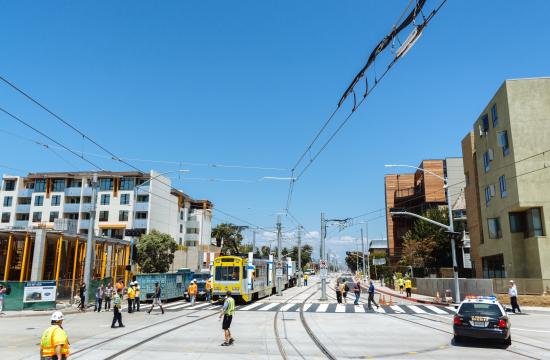 After being without rail transit for 63 years, Santa Monica will be connected to Metro’s system this spring, with much-awaited Expo Line services beginning Friday May 20, 2016, the transportation authority announced today.

“I am very excited that the Expo line finally is coming to Santa Monica,” Santa Monica City Councilmember Gleam Davis told The Mirror. “It will give residents, workers, and visitors a great new transportation option. It will not solve the region’s traffic issues but, if folks are willing to ride it, it will give them an option that will avoid our congested freeways and streets.”

“Adding swift and convenient light rail to the choices Santa Monicans have for personal transportation is going to be a game-changer,” said Councilmember Kevin McKeown. “Like our wildly successful bikeshare, Expo won’t eliminate traffic, as those who choose to drive will still do so – but every person on a bike or a train is one less car on the road, and that’s good for all of us and for our environment.”

Metro Expo Line stations have been set at specific locations to help workers reach jobs in the media and tech corridors of West L.A. and Santa Monica, according to Metro.

“Most of us live regional lives with work, school, friends and family throughout Los Angeles County,” said Councilmember Pam O’Connor. “Expo Light Rail provides a new choice in how to get around the region.”

Expo Line Phase 2 rail operations and maintenance facility in Santa Monica was turned over Tuesday to Metro, marking substantial completion of the project, and meaning that construction is done, Metro said.

The coming weeks will see continued testing on the line, employee training and community outreach to promote safety around the rail corridor, according to Metro.

Motorists are encouraged to be alert and to watch for the presence of trains. Drivers should keep clear of closed crossing gates and look both ways before crossing the tracks. Pedestrians, bicyclists and motorists should adhere to all posted “no right turn on red” signs.