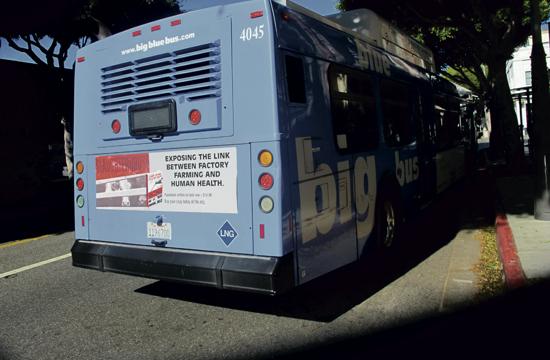 The Big Blue Bus’ (BBB) advertising policy comes before Santa Monica City Council Tuesday, with non-profit organizations calling for a change to regulations. Upset surrounding regulation interpretations in 2011 has, in-part, lead to one non-profit drafting their own initiative, the “City Attorney Accountability Act,” calling for the role to become an elected position.

The issue of bus advertising regulation came to light for AIDS Walk Los Angeles five years ago. As regular advertisers on the BBB, a revision of regulation interpretation by Santa Monica City’s Attorney’s Office saw their ads removed from buses as the organization was not deemed “commercial.”

According to the most recent City staff report, “for at least fifteen years, the City’s bus advertising policy has prohibited non-commercial advertisements on the exterior of City buses.”

AIDS Walk Los Angeles had their ads on the buses up until 2012.

Craig Miller, a 32-year resident of Santa Monica and Founder and Senior Organizer of AIDS Walk Los Angeles claims that the regulations should apply to the advertisement itself and not to the organization – for example, a non-profit could be advertising a commercial sale of a book, a commercial sales event, or a product.

Others hit by the non-profit ban have included merchants and business associations; the Pier Merchants and Third Street Promenade, due to their non-profit structure.

Even more confusing is the current advertisement on a BBB by non-profit, the Humane Farming Association.

Miller explained to The Mirror that he found it “shocking” that the City Attorney had, “misinterpreted her own regulations on so many occasions.”

He is leading the charge to have the Santa Monica City Attorney become an elected position.

“Santa Monica needs a City Attorney elected by the voters, not one that can be appointed behind closed doors,” Miller stated.

“This office should be democratically elected…and held directly accountable to the city’s residents,” he said.

Miller has drafted a ballot initiative, the “City Attorney Accountability Act.” The initiative is currently in the petition stage, and if it receives 13,000 signatures, it will become a measure on the ballot in November’s elections.

“The power of initiative is among the people’s basic rights,” City Attorney Marsh Moutrie said. “I have no criticism of anyone choosing to exercise their rights."