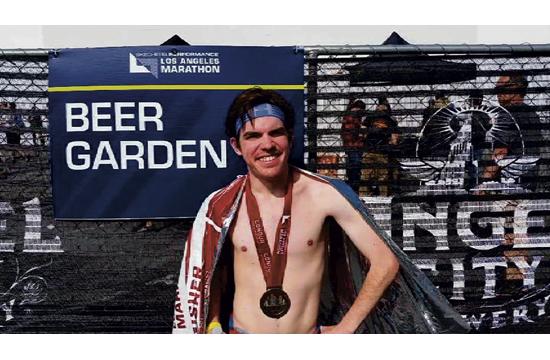 Runners slowly migrated in after completing the annual LA Marathon from Dodgers Stadium to the sea.

In keeping with tradition, the festival area served as final resting place for the runners, a place to relax, recline, laugh and cry, and breathe a deep sigh of relief.

Men and women of all walks of life and all ages passed through, many sporting mylar blankets, holding onto squeezable drink bottles and tearing into fists full of protein bars as they worked to recharge their spent batteries. They all shared a critical piece of hardware, a large silver finisher medal worn proudly around their necks.

Running a marathon is not for the faint of heart. It requires commitment, determination, and true grit. It also requires a simple idea that’s been uttered by men throughout the ages. “Why not me?”  Inside the finisher circle the Why not Me crowd was busy hanging out with family and friends, sharing hugs of congratulations, sighs of relief, and the feeling of satisfaction that comes at the end of a long journey.

“I feel good.  I feel like I achieved a big accomplishment today so I feel proud,” said Claire Cronenweth of Pasadena, who had been training for the event since Thanksgiving.

“It went really well. I had my best time yet,” said Chris James, completing his third LA Marathon. “I was feeling pretty good until about mile 22 and that’s when the wall started to hit but I said ‘alright kick it into gear and try to get to the finish line faster.’”

Asked how he was feeling now that it was over he replied, “I feel great. It doesn’t ache as much because I feel happy that it’s done.”

James worked his way up to marathons, on a mission of “wanting to beat himself.”

That sentiment was echoed by many runners in Santa Monica. The idea that the greatest competition is the competition within themselves, even when faced with obstacles and limitations.

A handsome gentleman in his early 50s with dark hair and dark eyes resting near a stoop by the beer garden seemed frustrated by his performance. He mentioned that his training had gotten off track. Asked what could be attributed to that he shrugged his shoulders and pointed down to his ankle, “and this probably didn’t help,” somehow forgetting that he had just completed a marathon despite running on a swollen ankle.

Another gentleman in his mid-40s, originally from Germany, mentioned that it was the second time that he had run the marathon but the only the first time in four years. Turns out that over that time he had endured two ACL surgeries, a quiet reminder that oftentimes the greatest battles are the ones that take place within and that sometimes the pursuit of a goal is greater than the victory itself.

For the younger James, training is part of the event. “It feels great,” he said of preparation. “You’re done with work and you want to have a little bit of time to yourself, you just on your iPod and cover three miles and you’ve gotten your exercise.” Asked how his knees were he knocked on the hard cartilage area of his knee and smiled before saying, “Right now they’re still intact.”