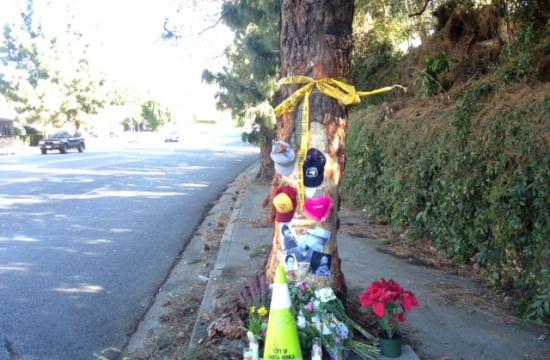 Tributes are filling the corner of Ocean Park and Centinela after a fatal car crash appears to have left at least one local resident dead.

Hats and photographs have been attached to a tree, with one reading "Brian & Mari you will be missed."

Markings on the road and a displaced Big Blue Bus trash can indicates that the car left Ocean Park Boulevard heading East, crashing into the trash bin (ripping it from its fittings), smashing through a fire hydrant and then heading into a tree across the road.

The City of Los Angeles Fire Department was also alerted to this incident, as is very common on border line calls. Santa Monica Fire Department units arrived on scene and found a single vehicle traffic collision that started in the city of Santa Monica, crossed the city line, knocked over a street light, and came to rest in the City of Los Angeles.

Santa Monica and Los Angles Firefighters worked together to treat the single patient, access the electrical hazard of the toppled light pole, and shut down the sheared off fire hydrant.

Also on scene were Santa Monica Police, Los Angeles Police, and Public works from both Cities. Unknown what caused the accident.