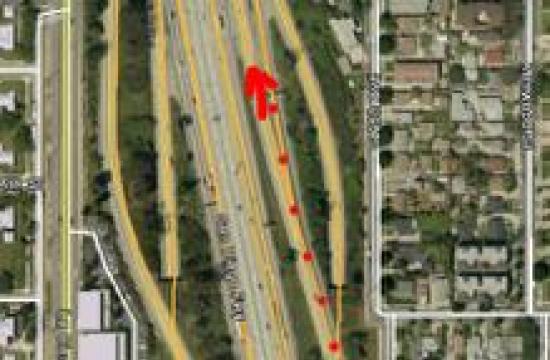 The California Department of Transportation (Caltrans) will deploy nearly 100 maintenance (white and yellow hardhats) and community service workers (orange hardhats) to perform “swarm” maintenance on Sunday, February 21 in closed sections of the Glenn Anderson Freeway (I-105)/San Diego Freeway (I-405) Interchange from 5 am to noon.

Crews will remove litter and graffiti, trim trees, clear weeds, repair guardrail and irrigation, and clear drains and culverts.  Motorists should expect delays.  Signed detours will be in place.

The closures will occur at the following locations:

Two lanes that connect to the Manchester Boulevard slip ramp

Usually crews only have a short closure window within the I-105/I-405 Interchange due to high traffic volumes.  By increasing the window to seven hours and placing several personnel into one closure, crews will be able to accomplish several tasks all at once to maximize their efforts and reduce costs.

During the City of Los Angeles’ Sixth Street Bridge demolition over US 101 from February 5 to February 7, Caltrans seized the opportunity to perform several maintenance tasks in the closure, saving tax payers thousands of dollars, and reducing the need for future closures.  Working in closed sections of freeways and highways, especially with the support and protection of the California Highway Patrol, the chance of injury to motorists and Caltrans employees is significantly reduced.