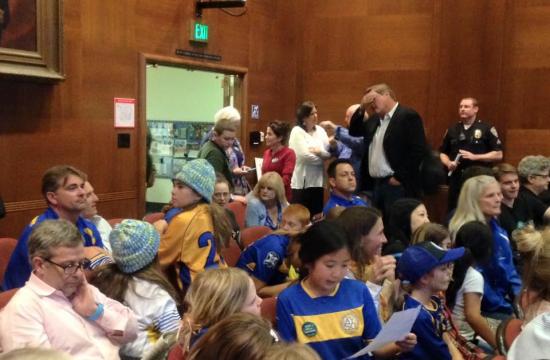 Over one hundreds kids and sports field-at-Civic supporters rallied at City Hall last night in an effort to get the much-awaited promise of a sports field put into motion.

Kids as young as 6 took to the dais, asking City Council to come true on the 2005 Civic Center Specific Plan, that includes a playing field.

Council resolved a direction to staff to look into the possibility of a temporary playing field as more permanent plans would likely take "years and years," according to Councilmember Gleam Davis.

City Manager Rick Cole reiterated that City Council has the power to do "anything," however no-one took his lead, electing instead to see what City Staff comes back with in their earliest instance regarding a temporary pitch.

For a more in depth look at this issue, check out The Santa Monica Mirror Friday 12 edition.