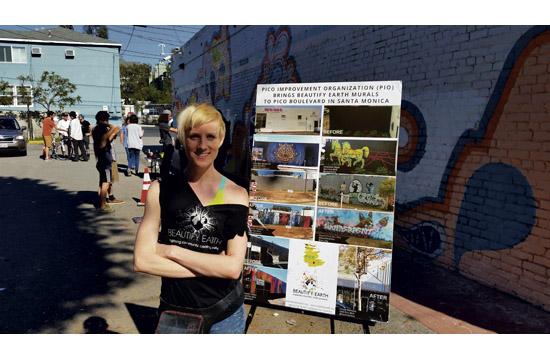 Volunteer artists put their paint brushes to work Sunday in Santa Monica, creating a stunning mural on the wall of Bubble Beach Laundry on Main Street.

“It’s like a big paint by numbers,” explained Heather Rabun of Beautify Earth, “a coloring book, a painting coloring book.”

More than 100 volunteers arrived bright and early as a collaborative effort between Beautify Earth, the laundry and a sponsor who commissioned the work.

The design was a joint effort between lead-artist Karn who based the design on the memory of the sponsor’s late brother. Karn created the mural outline with volunteer artists adding color and pizazz to the work.

The piece is the latest in an impressive string of beautification projects by Beautify Earth, formerly known as Beautify Lincoln. The group was formed in an effort to beautify Lincoln Boulevard, convincing the owners of Novel Cafe to give them a try.

Based on the success of the project they went on to complete three others in the immediate area.

Executive Director of Beautify Earth, Evan Meyer, told The Mirror that he was inspired to form the groups after being involved with Ocean Park Association (OPA).

“I had this need to want to give back to the community,” Meyer said. “I didn’t want to wait. So, I figured I’d do it myself. Sometimes when too many people get involved nothing gets done.”

It was a slow process in the beginning but Beautify Earth is now well known in the city. Meyer said that they have also become popular within the business community as well, with local businesses seeing increased foot traffic and sales once projects are completed.

Meyer believes that murals can help improve underserved and economically depressed communities by restoring a sense of pride through the broken windows theory.

“Maintaining and monitoring urban environments in a well-ordered condition may stop further vandalism and escalation into more serious crime,” he said.

It can also be an important first step in garnering other important services such as street clean ups and local gardening projects, according to Meyer.

Beautify Earth has inspired other cities to model their business platform and recently helped organize a mural project in Mexico, organizers explained.

Meyer believes that Santa Monica could become a beacon for cities around the world in this regard.

“My personal vision is that Santa Monica could become the first neglect free city in the country,” he said.

For more information about upcoming projects in the local community and how you can become involved please visit: beautifyearth.com