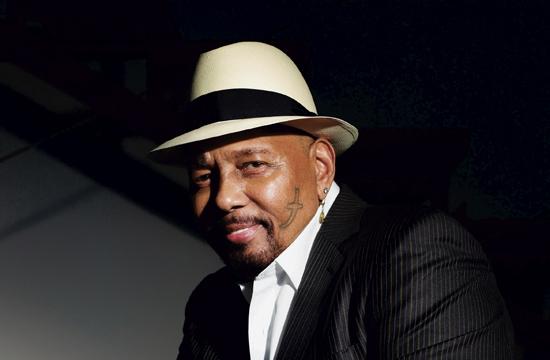 Internationally-renowned performer Aaron Neville is set to light up The Broad Stage next weekend, bringing a touch of Mardi Gras to the city.

Neville’s first hit single was the landmark “Tell It Like It Is,” which held the Number One spot on the R&B charts for five weeks in 1967. He went on to win Grammy Awards for his triple-platinum 1989 collaboration with Linda Ronstadt “Cry Like a Rainstorm, Howl Like the Wind,” and reached the Country charts with the title track of 1993’s The Grand Tour.”

During Neville’s career, he has moved seamlessly between solo work and his role in the first family of New Orleans music (he is a member of the Louisiana Music Hall of Fame), the Neville Brothers.

“When people tell me that my voice helped them through their rough times, I know what they’re talking about,” Neville said. “Because it helped me through my rough times, too.”

Neville grew up in the Calliope housing project in New Orleans. Living in that city was its own musical education. Keeping its own lazy pace in a bend of the Mississippi River, the Big Easy has long absorbed the music of the American South, the Caribbean, and Africa.

His biggest solo successes have been on the Adult Contemporary chart, where “Don’t Know Much,” “All My Life,” and “Everybody Plays the Fool,” all reached Number One in 8 European countries.

Neville’s latest album, “My True Story,” his first release for Blue Note Records, is a collection of twelve classic doo-wop numbers, performed in his utterly inimitable vocal style, and co-produced by Blue Note President Don Was and Keith Richards.

Music was inescapable inside the Neville home: Aaron’s mother and uncle were once a song and dance team, his uncle George Landry (Uncle Jolly) led a band of Mardi Gras Indians and his father collected Nat “King” Cole records. Aaron, as the third of the four Neville Brothers, also had the influence of older siblings Art and Charles.

Neville was embraced by Nashville when he made George Jones’ The Grand Tour the title song to his second A&M album. “I grew up going to the movies watching Roy Rogers and Gene Autry,” Neville said. “I was a big Hank Williams fan, and later on I loved Patsy Cline. I was a cowboy. I used to yodel and everything.”

Jazz and Blues at The Broad Stage made possible by a generous gift from Richard and Lisa Kendall, with the Aaron Neville Quintet stepping out for two performances only; Friday, February 12 at 7:30pm and Saturday, February 13 at 7:30pm.