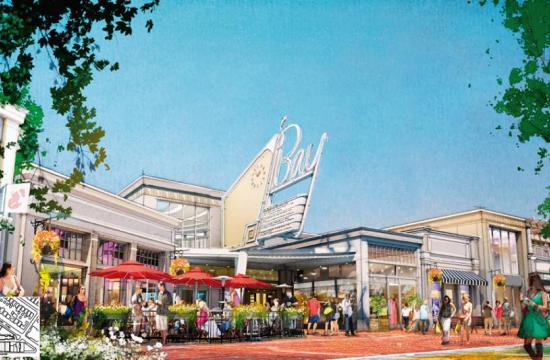 Until then, the proposed site in downtown Pacific Palisades on Swarthmore Avenue bordering Sunset Boulevard remains a sleepy ghost town-like street, with half of the shops shuttered.

One storefront on Swarthmore enduring the street’s lifelessness is confident that the Palisades Village redevelopment will pay off in the end.

Martin McCrory, a 15-year employee at the Palisades-staple Michele International, thinks the project will “undoubtedly” bring about more business.

“It’s got to,” McCrory, manager at the blow dry and braid bar, said. “There will be a lot of people coming here to see it. Any development that Caruso has been involved with in the past has been successful. I see no reason at all why this development shouldn’t be equally successful.”

Those other developments transformed by Caruso’s magic touch include The Grove and Americana at Brand.

McCrory estimated about 90 percent of the community is “totally in favor of” Caruso Affiliated’s project, which is all ready underway and pending Los Angeles City Council approval.

McCrory’s 1,400-square-foot space is set for teardown sometime in August or September, “and at that point, we’ll move out, find someplace else, for a short, intervening period while they rebuild the structures here,” he said. “And at the end of that period, which we expect to be at the end of 2017 or early 2018, we will move back and take up our new position in what we hope will be a phenomenal development. That’s what we’re all looking forward to.”

“The local Design Review Board (DRB) considered the project in January and will do so again in February, giving feedback on design elements for the shops and restaurants proposed for Swarthmore Avenue. After the DRB weighs in, the project’s environmental review documents will be released (likely in early February), and the community will have an opportunity to formally comment on the project once the documents are public. Mike has been impressed with the enormous and widespread vocal support for the project,” Bonin’s newsletter stated.

Over the last two years, communication between Caruso Affiliated and the Palisades community has been constant, with a “this plan is your plan” ethos surrounding the process. More than 50 community meetings and thousand of emails and phone calls among the community has given Palisades residents a real say in the project.

Requests from the community included a community room, a cinema, a specialty grocer, a park, an ice cream shop, outdoor dining, unique retailers, and increased parking. Caruso seems to have granted all requests.

Plans for the 2.8-acre retail and restaurant development were revealed in November 2014, after Rick Caruso, founder and chief executive of Caruso Affiliated, announced his purchase two years after he made public his plans to do so.

For retail, boutiques being considered for the development will feature specialty independent merchants and artisan brands, including some opening their first stores on the Westside. The plan also calls for six apartments above retail shops at the longtime site of a Mobil station.

“From quaint cottage style stores to crisp midcentury-modern corners and cute beach style houses with canopied balconies, all the new buildings combine to celebrate a natural coastal village character that is friendly, comfortable, safe, relatable and stimulating to residents and visitors alike,” according to Caruso Affiliated’s Project Description.

Central to the vision of the Village is to restore the once bustling heart of the Palisades to an open-air, Main Street–style district. Upon completion, the centerpiece of the neighborhood will be pedestrian walkways and paseos, landscaping, and open space, according to the developers.

The focal point of the project will bring back the S. Charles Lee-designed Bay Theatre, which closed in 1978 after three decades at 15140 Sunset Boulevard. The new neighborhood cinema will be outfitted with five screens and approximately 300 seats.