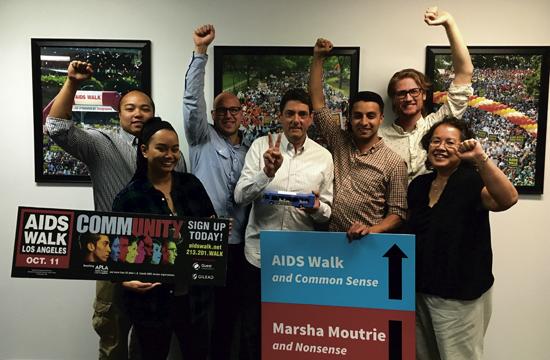 It was celebrations all round for AIDS Walk Los Angeles and other nonprofits as Santa Monica City Council overturned last week a 2012 ban on Big Blue Bus (BBB) advertising that saw commercial organizations have sole access to such rights.

This summer AIDS Walk Los Angeles will once again be featured on the sides of BBBs as they embark on routes through the streets of Santa Monica and throughout the city of Los Angeles.

AIDS Walk ads, having run on Big Blue Bus from 2006 through 2011, were banned beginning in 2012, along with most other ads from nonprofit organizations.

At the Council meeting, AIDS Project Los Angeles’ (APLA) Director of Government Affairs Phil Curtis was the first to speak on behalf of policy reform. “I’m delighted that the Council has chosen an option that allows APLA to once again promote AIDS Walk Los Angeles, as well as other initiatives to educate a broader audience in Santa Monica and the surrounding communities about the care, treatment, and services we offer,” Curtis said.

“This public policy victory on behalf of APLA will also benefit many other important nonprofit organizations and causes whose paid, public service-oriented ads, like ours for AIDS Walk, never should have been banned by that city’s government in the first place,” said Craig E. Thompson, CEO of APLA and APLA Health & Wellness.