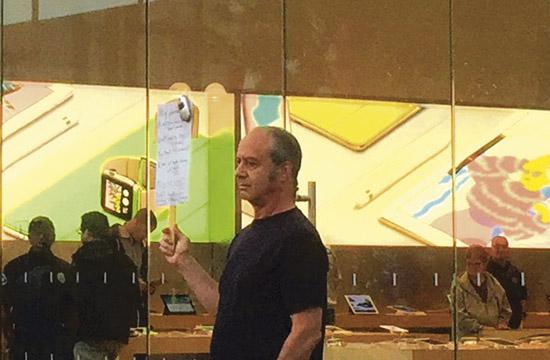 My column last week concerning the dust-up between the FBI and Apple over access to the data contained on the phone of Syed Rizwan Farook, the male perpetrator in the San Bernardino killings, brought interesting reader responses from divergent viewpoints. One comment included the confirmation that I am not the only person in Santa Monica still using a flip-phone and highlighted that cell phones might not be operating in a disaster when land lines might still be working.

But another reader response highlighted that a flip-phone is simply not practical in 2016 when people need to call Uber for a ride or to check traffic. Then it jumped to accusations about the police, which while a bit exuberant, did darkly relate to the issue: Should the government (especially law enforcement) have access to your data that, if I understand the writer correctly, could result in the planting of evidence and at the least a violation of rights.

Since the Apple v FBI dust-up emerged, there has been continuing firmness on the part of Apple to not provide a “backdoor” to law enforcement to the data contained on their phone products.  Apple’s CEO Tim Cook has portrayed the data security of its products as “a fundamental human right” in the following way: “I don’t need to know what time you go to bed at night; I don’t want to read your e-mails; I don’t want to read your texts,” Cook stated at a tech conference in October.

Critics point out that the government might be kept from your personal data, but Apple themselves can and could certainly access it to view customer habits.  And there’s also thinking that Apple – regardless of any deep and unrevealed feelings they might have as citizens about terrorism and threats – simply doesn’t want to be viewed as bending over to yield to authorities because it would alienate customers; a marketing move if not necessarily a ploy.

But even after a lot of media voices weighed in, I observe that we’re still at the crossroads we found ourselves at last week: If devices of any sort are used by citizens who have a presumption of privacy with that use, is that right of privacy as great or greater than the government’s need to always be a step ahead of those who mean us harm?

For just a moment, let’s consider the realm of unintended consequences. In the rescue and recovery efforts by first responders following the horror of the 9-11 attacks, it became painfully clear that the giving up of bandwidth to cell phones directly denigrated the quality of communications gear used by those first responders. In order for everybody to have their personal cell phones, the various walkie-talkies and so forth needed by emergency crews took a hit. There can also be a communications jam-up when there’s been, say, a very serious car pile-up on our own freeways and scores of people call 911 at the same time.

Not so long ago a person being pursued by law enforcement could dodge the ‘heat’ by using land line phones, staying on the move, and not talking to people. Now all of us can have our movements detected, as our cell phones become the equivalent of those ankle sensors for people under house arrest. And that possibly brings us to “personal data.”

Mr. Cook properly observes that others likely don’t want or “need” the minutiae of your personal life. That is until those personal details concern your plans to execute a mass killing or terrorist plot that could endanger many. Then there is unquestionably a want that comes with a very strong argument for need.

If I buy a two-dollar spiral notebook and write my diary or thoughts in it, I keep it in my home and I have a pretty good expectation of privacy about that notebook’s contents. If earlier in the day I shot up a college campus, then law enforcement gets a search warrant and it’s goodbye to my privacy in that notebook. The FBI is possibly equating that scenario with its desire for access to Farook’s phone data.

This, I think, is the location of the crack in the ice. We’ve come to see gun violence as a call for better monitoring of a potential shooter’s mental state if we observe a red flag in behavior. That monitoring can’t occur with the hands of authorities tied behind their backs. I may have a fundamental ‘right’ to fantasize a plan for violence in a spiral notebook which we can consider an ‘old school’ device. But simply because my modern device doesn’t require a Bic pen to function doesn’t mean efforts to stop needless deaths should be thwarted. Yes, that’s unpleasant; that anybody could access your thoughts committed to either paper or data devices.  Unfortunately we’ve demonstrated that as a society, frankly, we can’t all be trusted. Put another way, any rights you may have ever had to not have the police question your kid about a friend’s behavior either before or after an act of violence went out the window at Sandy Hook. In Apple v FBI the situation is not expectations of privacy but painfully realized knowns about us as humans and our current tendency to want to kill each other.