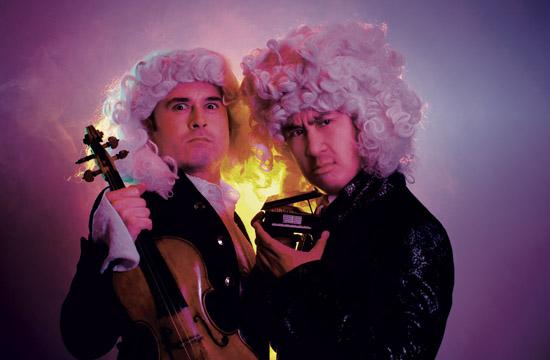 If Trey Parker and Matt Stone played the violin and piano, if Penn and Teller performed music instead of magic, and if Seth Macfarlane had a twin, they would be the brilliantly outrageous Igudesman & Joo. The duo has been billed as “the craziest, most hysterically funny music ever.”

Igudsman & Joo perform are scheduled to play at The Broad Stage on Friday, March 11 at 7.30pm.

Violinist Aleksey Igudesman and pianist Hyung-Ki Joo are the inventive comic duo whose hilarious mix of music, pop culture and pure zaniness has won them fans of all ages and cultures worldwide. As evidence, their YouTube sketches have attracted 40 million views.

As an antidote to the stuffiness of most concerts, Igudesman and Joo transform the concert stage into a musical Pee-wee’s Playhouse, where the three Bs can be Bach, Beethoven and Bond, James Bond. Igudesman and Joo don’t just play the violin with a vibrating milk frother or use wood blocks to tickle the ivories; they do it with dazzling virtuosity.

Their comic and musical madness has also developed a huge celebrity following. Rock and Roll Hall of Famer Billy Joel jumped on stage for an encore performance with them at Carnegie Hall. John Malkovich rocked in his Bach skit. Terry Jones of Monty Python has said the duo “brings surrealism to the concert hall and takes its trousers down”

Their new hit show “And Now Mozart” is on a 20-city U.S. tour with Santa Monica on the bill.

The duo met as teenagers, training at the prestigious Yehudi Menuhin School in Surrey, England. Each has a distinguished solo career, composing, arranging and performing with orchestras and chamber groups worldwide, as well as working on film scores and mentoring young musicians. The successful collaboration was born out of a desire to create a concert that they would actually want to attend.