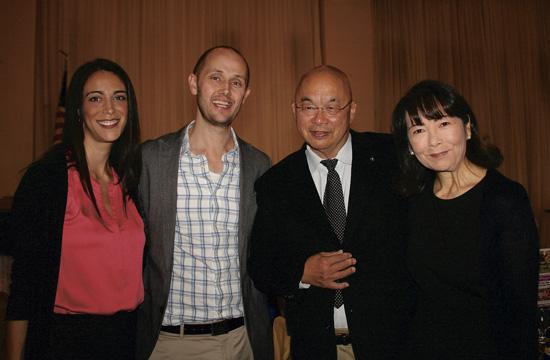 The next generation of computers, or “quantum computers,” will promise greater power and faster processing speeds once they can draw their computing power from super-cooled molecules, according to the January 29 meeting of the Santa Monica Rotary Club.

Rotarian Adam Lichtl, introducing the day’s speaker, primed the room on what quantum computing means in layman’s terms, calling it a rare event in which the exploration of science meets practical engineering.

“A lot of times people are trying to understand the universe around them, what’s out there, and where the universe came from,” Lichtl, former SpaceX director of research, said.

“Other times, people are trying to engineer solutions to problems using existing technologies – how do I make a stronger bridge? How do I make a taller building? And it’s interesting when you see the intersection of these two things.”

Take the telephone switchboard for example.

“If you wanted to make a phone call 100 years ago, you would call up and an operator would take a cable and plug it into a jack, and that’s how calls were connected,” he said.

The phone operator career was a major source of employment in many rural cities, Lichtl explained, but it was still a terrible and inefficient system.

“So they came up with a different kind of switch using newly discovered laws of fundamental physics. In that case, at that time, it was quantum mechanics, and the new switch they came up with was the transistor, a semiconductor. It conducts, it sometimes doesn’t conduct – that’s the quantum nature of it,” he said.

With this, the development of the transistor led to the birth of computing industry and the technology we harness today, Lichtl explained.

“So there’s really no limit to what engineers can do if they marry their work with the deep, explorative questions that people are asking about how the universe works,” he said. “Quantum computing is such a theory, because in the same way that the invention of the transistor opened up an entirely new field and entirely new devices people hadn’t even imagined, they were just trying to connect phone calls. Quantum computing will do the same thing when it’s a reality.”

Speaker Eric Hudson, a UCLA assistant professor of physics, has dedicated his research toward quantum computation with ultra-cold molecular ions and a search for any variation of the fundamental constants of nature.

In quantum computing, to harness the unique quantum mechanical properties of atomic particles means scientists must chill molecules to a fraction of a degree above absolute zero, the temperature at which they can be manipulated to store and transmit data, Hudson said.

Hudson earned his Ph.D. at the University of Colorado at Boulder in 2006 for work in atomic, molecular, and optical physics with ultracold polar molecules. After a postdoctoral fellowship at Yale University, he joined the faculty of the UCLA in 2008.

“The goal is to build a computer that doesn’t work with zeros and ones, but with quantum mechanical objects,” Hudson explained. “A quantum computer could crack any code created by a classical computer and transmit information perfectly securely.”

To wrap up the meeting, the Rotary Club of Santa Monica presented the Westside School of Ballet with a grant.

“The Westside Ballet in Santa Monica is dedicated to excellence and training the development of the students and artists, and every year since the school’s founding in 1967, its students have been awarded scholarships for the major ballet companies schools’ summer programs,” presenter Melissa Dagodag said.

“Your gift helps enable not only our presentation to the community but to the children in the community, as well,” replied Caprice Walker, head of the Children’s Division of the Westside School of Ballet.

This year, Westside Ballet has nine sold-out performances at the Broad Stage in Santa Monica with Symphony Orchestra, she said, and they plan to use the grant money to enhance the productions and reach out to Santa Monica-Malibu Unified School District students.