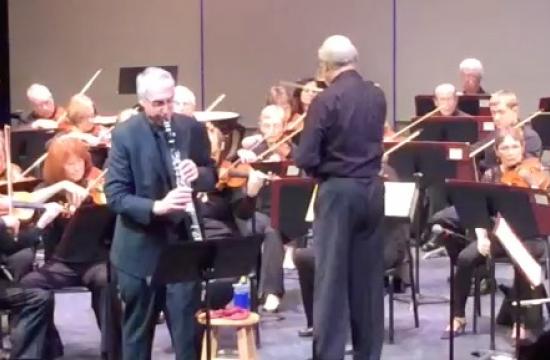 As part of its classical music promotion and outreach to the community, OSM provided free tickets to young student musicians of the Santa Monica Youth Orchestra. For many, it was their first-time experiencing a live professional-level orchestra performance.

“The orchestra played brilliantly and the clarinet concerto was superb,” commented an audience member.

Teen volunteers from Santa Monica’s Boys & Girls Club also participated in the event, handing out concert programs, serving as ushers, and enjoying the music as well.

“These young people and their families, along with regular and new OSM audience-goers created a very diverse, energized, and enthusiastic crowd,” organizers said.

Music Director Allen Robert Gross introduced the program by talking about the pieces to be performed and asking the musicians to play a few excerpts to demonstrate his points. To contrast Mozart’s abilities as a youthful prodigy to those as a masterful genius, the concert opened with his “Symphony No. 21” composed at age 16 and closed with “Symphony No. 39” composed in his early 30’s.

“Between these two symphonies was the highlight of the program ….Mozart’s “Clarinet Concerto” performed by principal clarinetist Gary Bovyer on the rarely heard basset clarinet,” organizers said.

“Fantastic concert…. I loved Allen Gross giving us an ‘audience Mozart master class’ at the beginning,” an audience member stated.

“A wonderful afternoon of music. The venue really added to the experience… great acoustics and intimate setting.”

The Moss Theater, which seats just over 300 people, provides an ideal environment for accomplishing this sense of community among audience members and musicians, according to the orchestra. Following each concert, OSM provides a complimentary reception for everyone in the Moss main lobby. “This provides a great opportunity for people to visit with Maestro Gross, the featured soloist, the musicians, OSM board members, friends, family, and fellow music-lovers,” the orchestra said.

OSM’s next concert on Sunday, April 24 at 2:30pm is entitled “The Flamenco Guitar” and will feature guitarist Adam Del Monte in Rodrigo’s “Concierto de Aranjuez” and “Paisajes,” a concerto written by Del Monte himself. The concert will lead off with Bizet’s popular “Carmen Suite.” More information on OSM can be found at orchestrasantamonica.org.