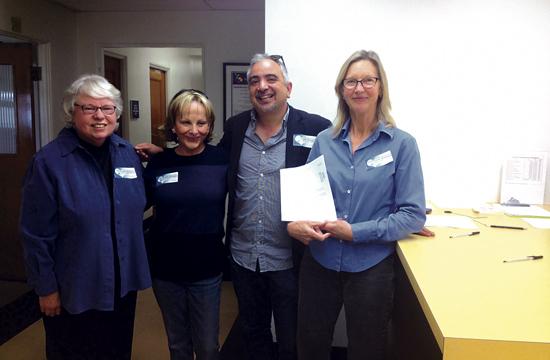 Members of Santa Monica residents’ advocacy group residocracy.org filed with the Santa Monica City Clerk yesterday a Notice of Intent to circulate the Land Use Voter Empowerment Initiative (LUVE Initiative), a proposed ballot measure that could give voters the final say on approval of large development in the city.

The move follows years of outrage within the community regarding developer speculation and the vanishing Santa Monica of old.

“Resident voices and concerns should never be ignored by City Hall, yet when it comes to major development decisions in Santa Monica, residents have been ignored for far too long,”

said Armen Melkonians, a proponent of the LUVE Initiative and founder of Residocracy. “The Land Use Voter Empowerment Initiative will ensure that resident voices cannot be ignored.”

If passed, the LUVE Initiative would apply to development citywide.

“Residents are tired of engaging in phony processes at City Hall,” said Residocracy Advisory Board member Tricia Crane. “LUVE will give us a voice in the process, which has been manipulated by developers to serve their interests and ruin our quality of life. It’s time for residents to take back our city and LUVE will make this possible.”

Within 15 days of receipt of the notice of intent the City Clerk’s office is required to provide the proponents a ballot title and summary. Once published, the proponents may begin circulating petitions to gather signatures. If 10 percent of voters’ signatures are collected, the LUVE Initiative will be on the ballot Tuesday November 8, if 15 percent are collected, a special election may be sought. City Council can also adopt the ordinance without alteration at a regular meeting if minimum signatures are received.

Residocracy.org is the resident organization that in 2014 spearheaded a successful voter referendum against the massive Hines development at the site of the former PaperMate pen plant. Residocracy’s referendum campaign gathered more than 13,000 signatures in three weeks. City Council voted to repeal the development agreement rather than see it placed on the ballot.