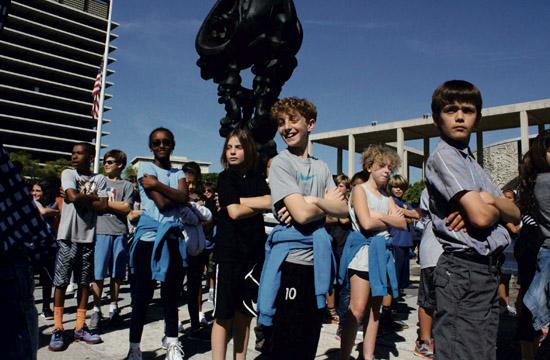 Students from Crossroads Elementary joined more than 6,000 fifth grade students from across Los Angeles and more than 18,000 in total as part of the 46th Annual Blue Ribbon Children’s Festival with a simultaneous performance of a Hip-Hop dance on The Music Center Plaza.

After weeks of in-class preparation, the students attended a live performance at The Music Center for free and then performed a special piece choreographed just for them.

For many students, the Festival was their first opportunity to experience a live performing arts event.

Founded by Dorothy Chandler in 1968, The Blue Ribbon is committed to giving students access to the best of the performing arts from a young age, organizers said.

This year, participating students from more than 240 schools throughout Los Angeles County explored the many dimensions of Hip-Hop culture, in the performances they watched, in their own dance and in the curriculum materials developed to complement their performance and their overall experience at The Music Center.

Students saw music and dance performances in the iconic Dorothy Chandler Pavilion by both Black Violin and Rennie Harris RHAW.

As classically trained instrumentalists, Black Violin has been credited with melding the traditional with popular culture, creating a groundbreaking musical category that blends classical music, Hip-Hop, Rock, R&B and Bluegrass.

The group, which includes Wilner “Will B” Baptiste on viola and Kevin “Kev Marcus” Sylvester on violin, has performed on Broadway, at the legendary Apollo Theatre and for President Barack Obama’s inaugural ball, among many locations all over the world.

Rennie Harris RHAW (Rennie Harris Awe-Inspiring Works) is a dance company that focuses on youth and urban culture. Since the age of 15, Dr. Lorenzo “Rennie” Harris has been a voice for the significance of “street” origins in any dance style. Dr. Harris founded RHAW in response to the overwhelming interest from teens and young adults to join his internationally renowned company Rennie Harris Puremovement, a Hip-Hop dance company dedicated to preserving and disseminating Hip-Hop culture.

The two companies performed six times for the students, twice per day on all three days of the Festival. Following each performance, the students join together in a choreographed dance that incorporates music and movements from the live presentation. The choreography for the student dance was inspired by the many dimensions of Hip-Hop, including its improvisational nature and the influences of “street culture."