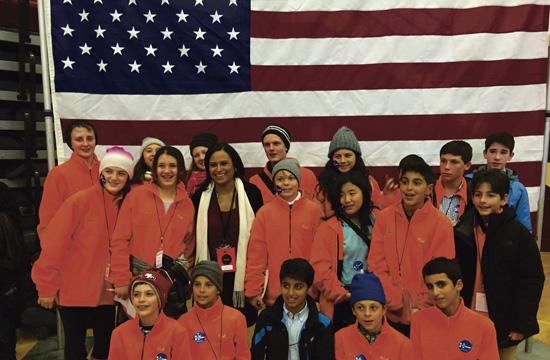 A group of budding Santa Monica student reporters has recently returned from a trip of a lifetime – attending the caucuses in Iowa. They filed this report.

On January 30, 19 sixth graders from Carlthorp School in Santa Monica had the opportunity to fly to Des Moines, Iowa to experience the once in a lifetime trip of witnessing the Iowa Caucus.

“As the next generation of voters, it is extremely important for us to learn about the political process and the issues so that we will be prepared in the future,” said Will Sheehy, a sixth grade KidUnity student.

Since December 2, the sixth graders have been preparing for the big day, working continuously by analyzing polls, issues, debates, and major topics each week.

While in Iowa they attended a host of events, including meeting Jessica Yellin, a former Chief White House Correspondent for CNN, who coached them in reporting skills.

KidUnity personally interviewed current presidential candidate Senator Bernie Sanders. “Politics is very important business, and if any of your friends tell you that you should not be thinking about the important issues facing our country, that’s not right,” Senator Sanders told KidUnity. “So I want you all to be thinking and discussing with each other, and debating, where you think our country should go and what the problems are, and I hope that from this experience, you all be involved in the political process for the rest of your lives. Democracy means that everybody should be participating, not just a few.”

Dr. Ben Carson answered their questions about his plan to defeat ISIS, and when asked about dropping out of the race, Governor Martin O’Malley stated, “Usually the caucuses don’t turn out the way the polls say, so my respectful answer is polls shmolls.”

The students found interviewing the candidates exhilarating and nerve racking at the same time.

They snagged an exclusive interview with Governor Sarah Palin, which many other journalists were denied. At the end of the interview, Palin sighed that it was the best interview she’s ever had, and they were the most polite kids she’s ever met.

The students also gained insightful exposure by visiting Bernie Sanders’s, Rand Paul’s and Ted Cruz’s headquarters to observe the inside operations of a campaign.

KidUnity was also able to have an exclusive meeting with U.S. Secretary of Agriculture Tom Vilsack and his wife, Christie Vilsack of USAID. “Stay involved, dream big, and never give up,” advised Tom Vilsack.

The student journalists’ feats were featured in large newspapers and websites such as the Wall Street Journal, Huffington Post, Daily Mail, Twitter @KidUnity, and Snapchat, where they received over 1.8 million views. The trip was an incredible experience and opened the eyes of these sixth graders to a whole different aspect of the presidential race that many of us never knew existed.

KidUnity was founded as an after school program by two Carlthorp School parents, David Snow and Peter Sheehy, to teach students more about civics and the presidential election process.