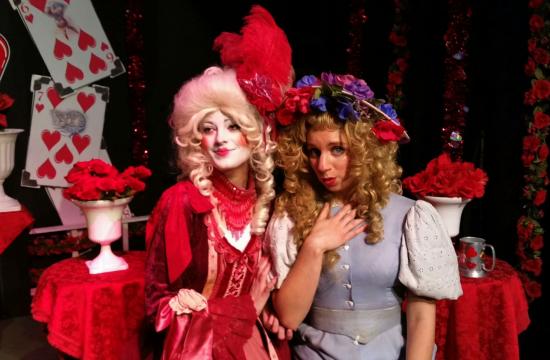 Based on the eye popping box office numbers that Kung Fu Panda III produced last weekend there must have been an awful lot of children pulling on their parents pants pockets begging to for a trip to the local multiplex for some animated good fun while chowing down on buttered popcorn.

Meanwhile some people somewhere in a land far away were practicing the ancient art of theatre executed by characters that did not appear on a screen. The Santa Monica Playhouse production of Alice and the Wonderful Tea Party has been drawing young crowds since opening mid-January.

The play is based on the Lewis Carroll fairytale of similar name, providing an imaginative spin on the original. Credit is due to the fine work of co-artistic directors Chris DeCarlo and Evelyn Rudie who wrote and directed the production. The duo honors the zany and fantastical, while also laying a clear path for storytelling. Colors burst on stage, and the cast is filled with character.

Much to audience delight, it all starts a great bang! The Queen of Hearts is in a foul mood while in the late stages of party planning. In typical hierarchical fashion, the incompetent workers have made a mess of everything so they’d better get with it or else it will be time to claim somebody’s head.

Oh but wait, there really is a problem. Some disrespecting deviants, Dweedle Dee and Dweedle Dum, played with great relish by Katy Erin Corbell and Lauren Holiday, ate all of the biscuits and scones and then had the nerve to drink all of the tea! And so an emergency manager not from the state of Michigan is brought in to save the day.

The acting style of the production is high energy and high interaction. Everything is 0-60 and six seconds flat and the cast is up to the task.

While the action revolves around the tempestuous Queen of Hearts and her love of moods the story is about a young girl finding her way in a distant land.

It’s fun watching the queen’s trusted/untrusted servants carrying out the business at hand.  The three of hearts receives a demerit and becomes a three of hearts minus one creating real downward pressure on the two of hearts played with great gusto by Mary Ann Pianka.

Alice, played by Casey Maher, must tiptoe through the landscape as both an observer and a participant and does so without stepping on any minefields. Her majesty played by Cydne Moore, who has been a company member for the last 30 years, proves to be a fine host.

The entire production rests on the shoulders of five cast members; some of the roles are triple cast.

The interactive dynamic between the performers on stage and children in the audience adds to the magic of the play, giving children the opportunity to enter a rich and nuanced world of ideas, a fun reprieve from the long cumbersome weeks of structure and order inside the classroom. One young man was called up on stage in recognition of his birthday and he was smiling ear to ear.

Alice and The Wonderful Tea Party will be playing at The Santa Monica Playhouse through March 20th.  For more information and to learn about all of their programming please visit www.smplayhouse.com