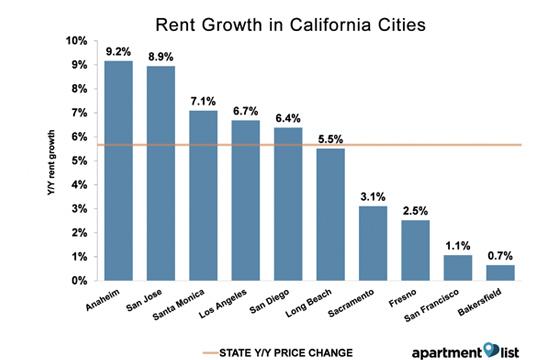 Santa Monica is one of the most expensive places to rent in California according to new statistics released this week.

“Santa Monica has some of the highest rents in California, with the median 2 bedroom apartment rent coming in at $4,370 – just a bit behind San Francisco, which has the highest rents in the nation,” explained Andrew Woo from apartmentlist. “Santa Monica rents are also rising more quickly than the rest of SoCal – 8.9 percent YoY compared to 6.7 percent in Los Angeles and 6.4 percent in San Diego,” Woo said.

The short answer as to why this is, according to Woo, is simply that Santa Monica is a desirable location with limited supply.

“As more renters move into the area and there’s not enough new rental housing built to accommodate that new demand, rents are driven up. Rent increases will eventually start to taper off, as renters begin to “spill over” to nearby locations, but it seems like Santa Monica rents could continue to increase a bit more before that happens,” he said.

California rent growth also outpaced the rest of the nation every month for the last year. California rents are growing nearly twice as quickly as the national average, according to the report. Rents have increased 5.7 percent over the last year compared to 3.3 percent nationwide, based on 2-bedroom units.

The report also found that recent months have seen a levelling.

“Overall, we’re starting to see rent growth slow down nationwide, and the same is true in California and SoCal as well,” Woo explained. “Santa Monica appears to be the exception to this, however, as rents are continuing to increase rapidly month over month.”

Apartment List RPM data is drawn from several hundred thousand monthly listings on our site. All average prices are calculated as the median for the specified size and time period. For top city rankings, we calculated median 1-bedroom and 2-bedroom rents in 100 top cities and then ranked them by 2-bedroom rents. Price changes are calculated using a “same unit” methodology similar to the Case-Shiller “repeat sales” home prices methodology, and averages are not value weighted.

“Our goal is to provide price transparency to America’s 105 million renters to help them make the best possible decisions in choosing a place to call home.”