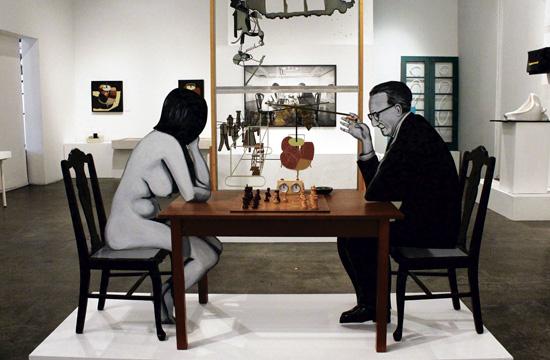 A new exhibition at Bergamot Station is offering a rare glimpse into art history, revealing the meticulous documentation of a 1963 Duchamp exhibition, captured by a young photographer at the time.

“It’s a show within a show, within a show,” explained Robert Berman, owner of The Robert Berman Gallery, describing his current exhibition Julian Wasser Duchamp in Pasadena Redux, which is running at his gallery through March 26.

Duchamp, who was in his 70’s in 1963, was considered one of the forefathers of conceptual art and the opening of the original exhibition was attended by such luminaries as Ed Ruscha, Billy Al Bengston, Larry Bell, Dennis Hopper, and a boyish looking Andy Warhol who flew in from New York to attend.

Julian Wasser, now living in Santa Monica, was a young photographer who had settled in Hollywood after serving in the Navy. He earned his stripes shooting crime scenes as a cub photographer during the 1950s while he was a teenager in his native Washington  DC. Wasser was assigned to cover the opening as a contract photographer for TIME magazine. Although, the photos were never published, his efforts at the opening produced iconic images inside the world of art including his photo reenactment of Duchamp’s painting Nude Descending a Staircase, an image of the artist sitting at a table studying a chess board while sitting across from a young buxom nude model faced away from camera.

The portrait created a buzz inside the art world because the model, Eve Babitz, who would later go on to become an iconic artist and writer in her own right, was having an affair with the gallery director at the time.

“Duchamp was in his mid to late 70’s and Julian is now in his late 70’s so it was appropriate to me to do this exhibition,” Berman explained. “Most of these photos had never been seen before. The photos show what led up to the exhibition.”

The exhibition also includes recreated works of art, otherwise known as appropriated works, by LA-based artist Greg Gibbs, to help round out the experience.

Julian Wasser Duchamp in Pasadena Redux originally opened in San Francisco and moved to Santa Monica location based on the success of its run.