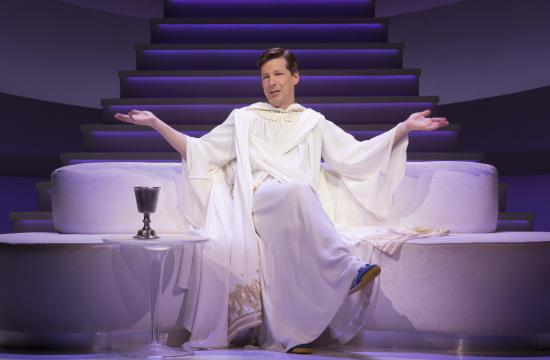 Get thy earthly bodies to the Ahmanson Theatre before the next plague comes upon you, as Sean Hayes’ God has materialized and is currently holding court in his breathtakingly beautiful heavenly home designed by Scott Pask, complete with a colorful stairway to heaven. The program lists original material by God, with additional hilarious material by David Javerbaum, whose sharp wit and social observations shine a comedic light on some biblical sacred cows. He also takes a swipe at the current state of politics with appropriately nasty comments on Ted Cruz and Donald Trump.

Brilliantly directed by Joe Mantello, beginning with a spectacular opening sequence, including a botched landing, you immediately know this will be a sermon unlike anything you’ve heard before. Seated on a white couch, dressed in a white robe and tennis shoes instead of sandals, Hayes’ God is determined to debunk what you’ve learned in Bible studies. In short, the play puts a different twist on just about everything you might hold sacred.

Hayes gives a masterful, uproarious performance. He immediately humanizes God, sharing that he sings, dances, and plays the piano, but doesn’t really excel at anything. With the 10 Commandments illuminated on a giant tablet at the top of the heavenly stairs, God boasts that he is not “A one-list wonder,” meaning he’s responsible for a lot more than that. For example, he boasted about the creation of the universe and earth, in particular. He shared that while inventing birds and fish, he couldn’t decide if fish should fly and birds should live in the water or visa versa. He said he was also undecided as to exactly which bugs and insects he should create, which is the reason why there are millions of different species.

One of the funnier bits was when two women came in late and had to climb over an entire row to get to their seats. God watches and says: “I am the Lord, King of the universe, but I’ll wait.” Breaking the fourth wall takes place several times during the play, adding to the comedy and cheeky material. The moving in and out of character added fuel to the already hilariously funny fire. Continuing with his fracturing of familiar Bible verses as recited by Gabriel, God systemically debunks each of the commandants, and eventually gets into the creation of Adam & Steve. Yes. Adam and Steve. He goes into a long explanation of exactly how he pulled that off and that they didn’t know they were gay until they ate of the forbidden fruit and felt shame for the first time.

At one point, Archangel Michael challenges God for letting people die of cancer and demands to know why he didn’t intervene during the Holocaust.  God looks at him and strips him of one of his wings, followed by a temper tantrum where the sky darkens and we hear thunder. He pulls himself together and apologizes, saying he was sorry we had to see that. “I made mankind in my image and I’m an asshole,” adding, “Being incompetent and omnipotent is a recipe for disaster.”

As far as who he considers to be the chosen people, he confesses that celebrities are his chosen people, debunking the long-held belief that Jews held that honor. That said, in a direct reference to the entertainment industry adds, “But, there’s an overlap.”

Javerbaum’s wit next focused on God talking about his son Jesus. We learn that he was the middle child and had a brother Zack and a sister Kathy. Oh yes. He also shared that Jesus got chicken pox at age six.  God made some comments about Mary and Joseph saying they misread the sign in Bethlehem. It didn’t say manger. It said manager.” Don’t even ask how he described taking communion. Hint: Think vampire and cannibalism.

Finally, in deference to the computer age, God talks about working with Steve Jobs in designing a brand new program called Universe 20, which would allow you to call an on-line angel either residing in heaven or India. If you can stop laughing, do enjoy the ending scene, which is as botched as the opening.

The Ahmanson Theatre is known for its sensational technical accomplishments. This time they have hit an even higher mark by assembling an award-winning, talented technical team whose contributions create stage magic. Pask’s scenic design is beautifully augmented by Hugh Vanstone’s shimmering light design that splatters the theatrical heaven with a kaleidoscope of rich, vibrant, ever-changing colors. Peter Nigrini’s projection design includes beautiful cumulus clouds that gently move across the sky which transition into fiery explosions reflecting God’s changing moods. Other members of the team include Gregory Meeh who did the special effects and David Zinn who did the costume design. Bravo to all for a fabulous job.

In closing, since the material is satirical and quite irreverent, this might not be the best evening of theatre for ultra-religious folks of any denomination. However, for the rest you, if you have a good sense of humor, Sean Hayes will have you laughing your sinful heads off as he takes you on a 90-minute romp through the Bible.