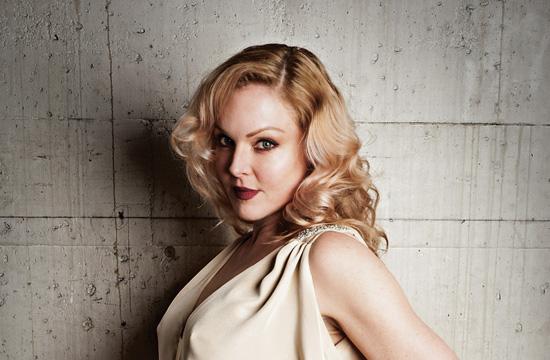 Storm Large and her band Le Bonheur will hit the Broad Stage for one performance only next Friday, February 26, at 7:30pm.

Pink Martini’s genre-defying chanteuse and author of bestselling memoir Crazy Enough is “an intoxicating and unmissable cocktail of power and vulnerability,” according to critics, and has made a name for herself as musician, actor, playwright, and author.

With a remarkable vibrato that moves from titillating love songs to rock goddess anthems, Large is a six-foot tall torch singer with an international cult following, and equally at home in a dive bar, The Broad Stage or at Carnegie Hall.

In  fall 2014, Large & Le Bonheur released “Le Bonheur,” a record designed to capture their sublime and subversive interpretations of the American Songbook.

On Pink Martini’s Heinz Records, the recording is a collection of tortured and titillating love songs; beautiful, familiar, yet twisted … much like the lady herself, according to promoters.

Large spent the 90s singing in clubs throughout San Francisco. Tired of the club scene, she moved to Portland to pursue a new career as a chef, but a last minute cancellation in 2002 at the Portland club Dante’s turned into a standing Wednesday night engagement for Storm and her new band, The Balls. It wasn’t long before Storm had a cult-like following in Portland, and a renewed singing career that was about to be launched onto the international stage.

Large shot to national prominence in 2006 as a finalist on the CBS show “Rock Star: Supernova,” where despite having been eliminated in the week before the finale, she built a fan base that follows her around the world to this day.

She made her debut as guest vocalist with the band Pink Martini in April 2011, singing four sold-out concerts with the National Symphony Orchestra at the Kennedy Center in Washington, DC. Large continues to perform with the band, touring nationally and internationally, and she was featured on their CD, “Get Happy.” She has also sung with Grammy winner k.d. lang, pianist Kirill Gerstein, punk rocker John Doe, singer/songwriter Rufus Wainwright, and Rock and Roll Hall of Famer George Clinton.