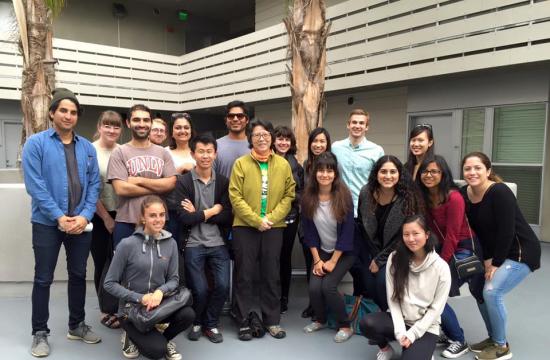 On January 30th, graduate and PhD students of urban design at UCLA, part of an official student organization called Bruins for Design and Development (BUDDY), organized a walking tour of affordable housing projects in Santa Monica. Two were in downtown Santa Monica, one in Ocean Park, and all had won awards from the American Institute of Architects.

The group of 26 walkers, mostly students, was led by Joan Ling, who retired from her full time professorship at UCLA and now lectures once per quarter in the Master of Arts in Urban Planning program. As the former Executive Director of Community Corporation of Santa Monica, she helped develop 1,400 units of affordable housing in the city and has been a longtime advocate for mixed-use and quality affordable housing.

Throughout the walk Ling stopped to provide background on everything from technical concepts, such as density measurements, to the history of the area to policy background. She consistently stopped to answer questions from her students along the way.

A good deal of the walk took place at the first stop, the housing complex located on Main Street between Tongva Park and the RAND building. Ling provided background on the spot’s history as a “dumping ground” for the railroad companies until RAND claimed the spot in the late 1940s.

Ling highlighted the point that the design of the complex revolved around practicalities, such as its underground parking garage. Student questions as well tended to be practical, such as how the housing could remain affordable while maintaining such features.

The building manager provided attendees an inside look at the complex’s basic operations, featuring an area for children and a help center for people who are in between jobs.

There was even, in a testament to how policy priorities can manifest themselves, a segment of studio apartments called Art Street.

Worried that rent hikes would price out its artistic community, the city designated 10 affordable studio apartments for artists in different professions. But, as Ling said, “I could be an artist because I sing in the shower,” so policymakers had to create ordinance defining who they could consider an artist.

In the end, what began ostensibly as a design tour highlighted all the features necessary to quality affordable housing and the creative ways Santa Monica has provided it.