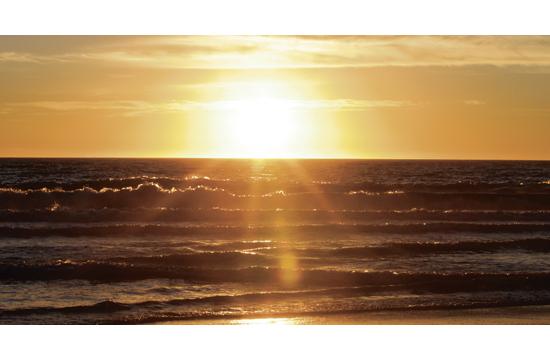 Vibrant colors, striking vistas and simply beautiful sunsets are part of the everyday for many Santa Monicans. Now, thanks to Santa Monica Sunset Cam, they are also part of life for people across the world.

As part of explore.org, the Santa-Monica based online portal and division of the Annenberg Foundation, Santa Monica Sunset Cam, which is set atop the Hotel Shangri-la rooftop, is a birds-eye view of our beautiful city.

“The cam operates around the clock, allowing people from all over the world to watch daily breathtaking sunsets, and escape to paradise without leaving home,” explained explore.org’s Jason Damata.

Explore.org is based in Santa Monica and was founded by Charles Annenberg Weingarten.

“The sunset we get here in Santa Monica is among the best in the world,” Annenberg Weingarten explained. “We set up this cam to share that beauty, and create community around what we call the golden hour.”

Explore has nearly 100 live-feed cameras in over 50 different locations across the world, ranging from artic landscapes, to pandas in China, to the super-cure kitten cabana.

“All of this footage is amazing because it’s observing nature, without the interference of humans. It’s pure and unfiltered,” Annenberg Weingarten said.

“It’s exciting to see it live,” he added, “because you never know what’s going to happen next. Seeing things as they happen is a special experience, and we believe we are building the zoos of the future, where you can see nature in its purest form.”

A recent installation at Laemmle Theater Santa Monica this holiday season saw polar bears in an edited live feed as they explored the arctic.

“It was an honor for explore.org to work with the city of Santa Monica in sharing the wondrous world of the Arctic over the holding season,” Annenberg Weingarten commented. “The holidays can be a time of stress for so many, and the fact that they can escape and remember how sacred our planet is while walking a city street, will be a gift to so many who need to unwind.”

Some of the most popular live streams at explore.org include brown bears in Katmai National Park in Alaska, polar bears in Manitoba, and the most recent addition: underwater cams documenting the regrowth of the kelp beds in Channel Islands National Park.

“You can take this science as far as you please,” Annenberg Weingarten said. “You can use the live cams to escape stress and simply soothe your soul to participating in live lectures. You can study the recorded footage and actually become one of the most advanced field scientists in the world.”

Explore.org’s library contains more than 250 original films and 30,000 photographs from around the globe, many of which have been showcased at film festivals throughout the United States.

To check out Santa Monica Sunset Cam go to: explore.org/live-cams/player/santa-monica-sunset-cam.

Explore.org, is an online portal for explore, is a community destination where people share thoughts, engage in conversation, view films and photographs, and embed their favorites on blogs and social networking sites. It is for everyone who enjoys learning new things and understands that education is a lifelong pursuit. Explore provides a variety of educational resources – from articles and films, to photographs and interactive maps – in an effort to encourage everyone to “never stop learning.”