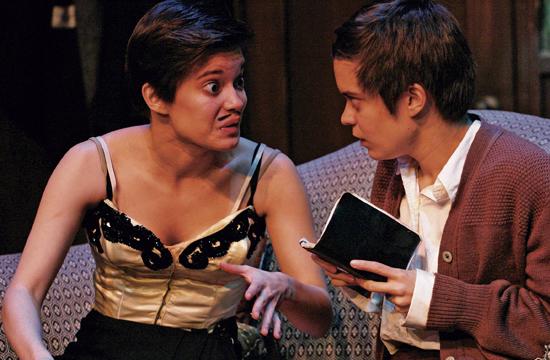 The Hollywood Fringe Festival is an annual event that showcases new works. “My Sister,” written by Janet Schlapkohl, won several awards. I’m sure what made the original production particularly interesting was that the two actresses; Elizabeth and Emily Hinkler are actually Azgin sex görüntüleri brazzers pornoda izlenir. identical twins, which is very unique casting. New material has been added to the current play, which has been expanded to 95 minutes without an intermission. Having not seen the original work, I can only comment on its present version and I’m afraid, although the ideas are well intentioned, the new version is overwritten, flawed, and somewhat derivative.

The story takes place in Berlin in the shadow of an expanding Hitler presence. Magda (Emily Hinkler) works part time in a local hospital.  She spends the rest of her time either lovingly tending to the needs of her sister Matilde,  (Elizabeth Hinkler) who is severely handicapped due to cerebral palsy, or singing and telling jokes in a local cabaret. Matilde, who is much more insightful than her sister, is housebound and spends her time listening to the radio and writing material for her sister’s act.  Despite her physical challenge, she is very playful and has a great sense of humor.  They live in a run-down room with the bathroom down the hall.  They treasure the bar of soap their neighbor Herr Holtz gave them, which they keep near the washbasin. Although we never see him, we learn that he wants to be a Nazi block leader and Magda tries to avoid him.

Accompanied by the “Piano Player,” Barbara Rottman, Magda sings her first song in the cabaret with a penciled-in moustache. The lyrics deride men and emphasize that women do very well without them and also touch upon what today we know as cross-gender.  It feels very much like the famous “Cabaret” without the talent of Liza Minnelli, which I guess is not a fair comparison.  Furthermore, Magda’s version of “Falling In Love Again,” was under pitched.  One could not help being reminded of the incomparable Marlene Dietrich’s famous torchy rendition of that song.  If you’re going to sing such an iconic piece of material, you’ve got to get it right.

Throughout the play, Schlapkohl sprinkles in some amusing lines, such as “When I was young, I wanted to be a doctor, but my parents forced me to be an actress.” When Magda looks for some cheese to eat, Matilde says, “I ate it all.  I can’t be alone with cheese.” They joke about their version of the height of fashion, which would be a woman walking with a monkey on a leash wearing a diamond collar.

As the action unfolds, we hear a lot of exterior noise and the sound of riots in the streets, which we are told is from the Hitler youth.  Magda talks about some of the sicker patients at the hospital being taken away in vans for special treatment at a clinic. Hitlerism is slowly permeating life in Berlin and ultimately she learns what the fate is of those patients taken away in the vans, including her favorite little patient. All that is left of him are his glasses.

Bye and bye Magda is given a copy of the National Socialists Performers Rules and now has to revamp her act to conform to those guidelines.  When she tells Matilde that she has to make some cuts in the material, she becomes very angry and doesn’t want to do it. Choices, however, are become more and more limited.   One particularly telling moment is the changing faces of the cabaret audiences, which went from civilian men and women to a room full of brown uniforms.

Hitler, as history tells us, ultimately declared martial law and named himself supreme leader, pressing down on Germany’s liberties.  Material broadcasted over the radio was supervised by Goebbels and anyone listening to oversees broadcasts would be guilty of treason and could be sent to a concentration camp. As freedoms are slowly usurped, Magda makes Matilde give up her beloved radio and well, we all know what the Final Solution was regarding the infirmed, homosexuals, and European Jews.

With regards to the two directors, Ron Sossi and Paul David Story, the direction, aside from the “historic” story line, did not have Sossi’s usual brilliant touch. There were very long pauses while stage business was executed, i.e. the dressing and undressing of Matilde.  Some of the lighting was so dark you couldn’t see the action, especially in the opening and closing scenes. My hunch is if Sossi was the sole director, cuts would have been made to the material and the pacing would have sped up.  As it stands, it’s a very long 95 minutes. Again, not having seen the original, shorter version, I suspect, the lack of Emily Hinkler’s vocal talent not withstanding, it was a much more compelling and a tighter presentation of “My Sister.”

Technically, the set design by Pete Hickok truly captures the poverty under which these sisters are living, while the sound design by Christopher Moscatiello took us outside the tiny room in which the girls live, illuminating the growing menace in the streets. Derrick McDaniel’s lighting design could use some improvement.