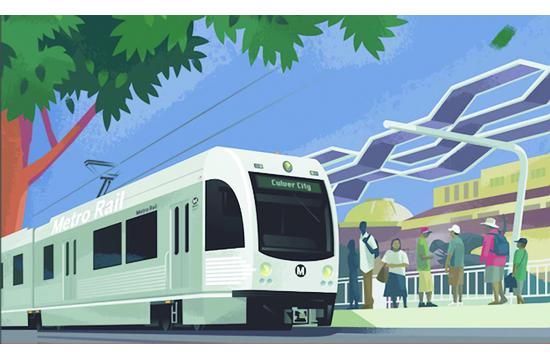 Years ago, the late singer-songwriter Richie Havens got a gig writing a tune for Amtrak commercials. His husky voice had a wonderful quality of instant credibility and it was effective in relaying a simple idea regarding rail transportation: “There’s something about a train…”

Yes, there is. Traveling across country, rail is a En harika rokettube pornoları. mule compared to jet airline transportation. In terms of urban transport it’s not ‘on demand’ like getting in your car or dialing Uber. And… it’s public. In New York City, subway rides can redefine your take on the word “public” when the doors close and a panhandler begins shouting a possibly belligerent screed meant to motivate you to put coins in his paper coffee cup just to get him to shut up.

But let’s talk about our trains, since the Metro line will soon be up and running in Santa Monica. bringing travel by train through LA to our shoreline. And because the Los Angeles County Metropolitan Transportation Authority has just reported that, for almost a decade, transit ridership (which includes buses) has declined.

Want a statistic to chew on? The Mirror reported that the study done by Metro indicates that despite $9 billion invested in new light rail and subway lines, Metro now has fewer passengers than it did three years ago when buses were the county’s only public transit option. Officials attribute all this to ridership being “cyclical” yet experts say falling gas prices, changing job markets (perhaps working at home), fare increases, and the popularity of options like bicycles and the aforementioned Uber might be representative of a permanent shift.

Either way, how are we to feel about the trains soon available in our own city? Certainly, we must provide options for people working in Santa Monica who need to get home to some other part of the city. Why provide a “living wage” only to force folks to own and insure a car? And then you may have read about this global warming thing, and our need to reduce burning fossil fuel in our two-ton personal conveyances.

Unfortunately the heart of our resistance to using Metro services may hold deeper and perhaps even troubling realities about our integrating with trains. Nothing makes me want to run and hug a tree more than the sight of a 123 pound woman in a black baseball cap piloting a huge pick-up truck or SUV through Brentwood. Not to single out that city or women, but only to cite an example of an area where there isn’t all that much rugged territory for off road ‘four-wheeling’ or a need to move cattle feed. Also, there’s never anybody else in the truck: Just a tiny person, possibly on their way to yoga class.

It’s no secret that low gas prices push up the sales of large, fuel-guzzling vehicles. But more mysterious is the need for them. I think we all know how much we love the privacy of a car. We play our music, we make our (hopefully) hands-free phone calls, and we adjust our hair or perhaps remove grime from various locations on our head. For some, it might be the only time of the day the kids aren’t there.

And trucks and SUV’s have that beautiful high seat position, where you literally look down on the others in traffic. Yes, this all sounds rather prejudicial. But still, if you are driving a pick-up around in LA and you don’t really use that loading area in back… like, ever… then what is going on, dude?

Let me posit that some of us just plain don’t like “the public.” Donald Trump loves those audiences that come to see him. But has ever spent 45 minutes on a train talking and getting to know those people? He prefers the very high seat position of his private jet.  I’m using extreme and some would say bogus examples to illustrate that the divisions in our society right now aren’t all just economic disparity. Some are, a little bit, attitude disparity. A condition I believe can be treated by spending more time out in public, say, riding a train.

At our home, we plan on giving the new Santa Monica trains at least a fair shot. We’ve been somewhat dubious about how people get to and from the train stops, especially the one at Bergamot Station. Many argued that people would ride bikes to the train stations, although not so much after sunset. And if you’re taking the whole family downtown by train for the day, be sure everybody has plenty of LED’s on their bike for the ride home from the station.

Let me paraphrase John and Yoko by saying that, as citizens, we need to give public a chance.  Much as we love our cars, and love the aloneness of them, there must be effective public transportation in a metropolis like LA. And now, that includes Santa Monica. While the full explanation for Metro’s decline in boardings might be complex, one answer to improving ridership is simple: Get on the train. It is one major effort we’re making to solve our traffic and air problems. And you’ll get out… in public.