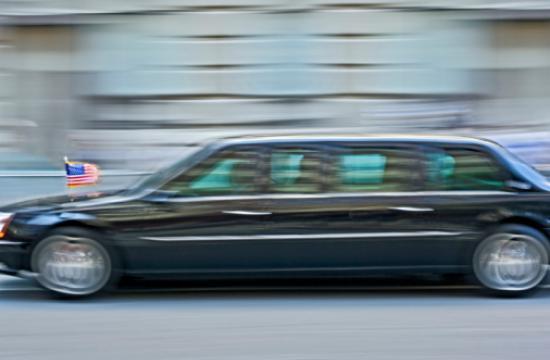 With President Barack Obama set to visit the Southland today, motorists in select parts of town should anticipate traffic delays to accommodate the presidential motorcade.

Specific details of the president’s travels are never made public, but police often provide general information about areas motorists should try to avoid.

— the area around North Hollywood Way between North San Fernando Boulevard and Forest Lawn Drive from 3:15 to 4:45p.m.;

— the area around North Hollywood Way between Forest Lawn Drive and North San Fernando Boulevard from 4:45 to 6:15 p.m.;

— the area around Rimpau Boulevard between West Pico Boulevard and West Sixth Street from 5:30 to 7 p.m.;

— the area around Wilshire Boulevard between South Hudson Avenue and South Arden Boulevard from 5:30 to 7 p.m.;

— the area around West Fourth Street between South Muirfield Road and Lorraine Boulevard from 7:15 to 8:45 p.m.;

— the area around Crenshaw Boulevard between Wilshire Boulevard and West Adams Boulevard from 8:45 to 10:30 p.m.; and

On Friday, motorists should avoid the following areas:

— the area around Wilshire Boulevard between the Westwood Village area and the 405 Freeway from 9:30 to 11 a.m.; and

— the area around South Bundy Drive between Ocean Park Boulevard and the Santa Monica (10) Freeway from 9:30 to 11 a.m.

Police also warned that roughly eight-minute closures are anticipated on Sepulveda Boulevard between Lincoln and Century boulevards between the approximate hours of 2:30 to 4 p.m. today and 9 to 10:30 a.m. Friday.

Los Angeles High School will close at 3 p.m. today, and South Rimpau Boulevard will be closed between Edgewood Place and West Olympic Boulevard from about 3 to 4 p.m.

In Burbank, Olive Avenue will be closed between North Pass Avenue and Hollywood Way from approximately 4 to 5:30 p.m.

South Rossmore Avenue in Hancock Park will be closed between West Third Street and Wilshire Boulevard from about 5 to 8 p.m., along with West Sixth Street between South Muirfield Road and South Arden Boulevard during the same time frame.

Hilgard Avenue in Westwood will be closed between Weyburn and Le Conte avenues from approximately 10 p.m. today through 10 a.m. Friday.