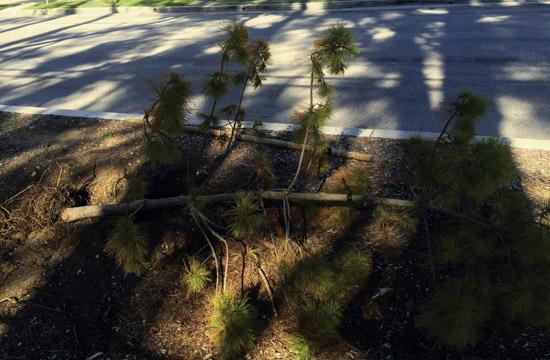 Recent heavy winds have caused havoc for some of the City’s youngest trees trying to make it on their own. Thanks to Santa Monica’s Urban Forest Task Force and vigilant residents, support stakes have been returned to help the saplings survive.

Most trees are planted with stakes to guide them through the early stages of life, but after some time, they are removed to enable the young trees to stand by themselves.

“Removing the supports from young trees is crucial because it promotes healthy root development and stem (trunk) thickening,” explained Urban Forester Matthew Wells. “Unfortunately, sometimes-extreme wind events will blow these trees over as they haven’t had time to develop the structural roots they need. These trees, as on Dewey, will need to be re-staked in the short-term until we can try again. Ultimately, a healthy young tree has to be able to support itself if it is to be successful in the urban forest.”

Trees that have been in the ground this long should preferably no longer require additional support, Wells said.

At the Dewey Street site where several small trees had lost their footing, Wister Dorta, the Urban Forest Supervisor who oversees tree planting, talked with The Mirror about the challenges of establishing urban trees, often more complicated than many appreciate.

As he and his team replaced the stakes, Dorta said that the pine trees are a trial species for the City of Santa Monica, and out of the 80 planted in Sunset Park, one has died and one has uprooted and toppled over.

The trees have been planted for approximately five years, according to Dorta.

The Urban Forest Task Force is open to the community, with its next meeting scheduled for March 30. For more information head to: smgov.net/portals/urbanforest