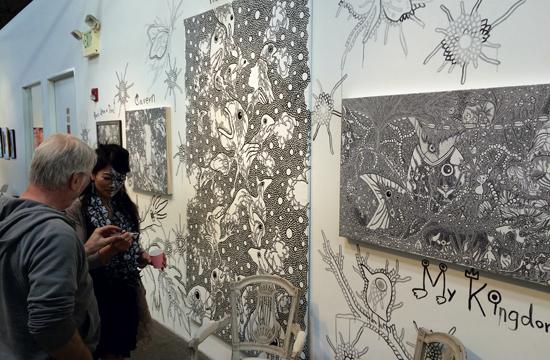 Santa Monica Airport opened the doors of its many artist studios and creative spaces to the public last Saturday for its 10th annual Art Walk, co-organized by the airport and the Santa Monica Cultural Affairs Division.

A range of crafts were on display from paintings to sculptures to ceramics. A group exhibit called “New Walled Cities and Hinterlands” presented blueprints for potential innovations to Los Angeles’ urban landscape. One studio offered demonstrations of early craft-making technologies such as typewriters (including one that belonged to Ray Bradbury) and a printing press. Interactive workshops on subjects ranging from comic books to sustainable landscaping to theater improv for children were schedules throughout the day.

What makes the Art Walk special is the ability to enter the workspace of the Airport’s resident artists to see their workspace as well as their work.

“I think it’s important to showcase our wonderful artist community here at the airport and to open the doors and let the public see how the world of the artist works,” said Deena Mecham, a property management assistant at the airport.

Many of the artists are local in substance as well as location. They have long held their residencies at the airport and their art typically covers the people and landscapes in Santa Monica.

Sally Lamb, who was born and raised in Santa Monica and has been working out of the airport studio since it opened 10 years ago, showcased large canvasses of the flora and fauna layered across her hometown.

“I call my paintings visual diaries,” she said. “[They’re] my hand print on the cave wall.”

Guest artwork was also festooned throughout the hallways between the studios, including work from the Center for Political Graphics and by Miki Yokoyama, whose intricate black and white sharpie drawings consistently drew a crowd.

The world of the artist is clearly alive and well at Santa Monica Airport, offering educational insight and surprises for yet another year.