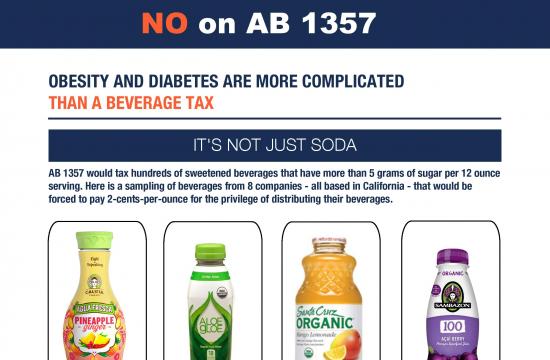 “Time and again, misguided tax proposals on sugar-sweetened beverages have been defeated in cities across the state, as witnessed last year in the California Legislature with Assembly Bill 1357 – legislation that received wide-spread opposition from business organizations, unions, vendors, grocers, retailers and restaurant owners throughout California. It’s time to move on and find real solutions to obesity and diabetes that will have a meaningful impact.

Taxes are not a solution to our public health challenges. Instead, they hurt small businesses and increase the costs of common grocery items, as we’ve seen in Berkeley, which is the only California city with this type of tax. The last thing that hard-working Californians need is another tax, which will only make it even more difficult to make ends meet in one of the most expensive states in the nation.”