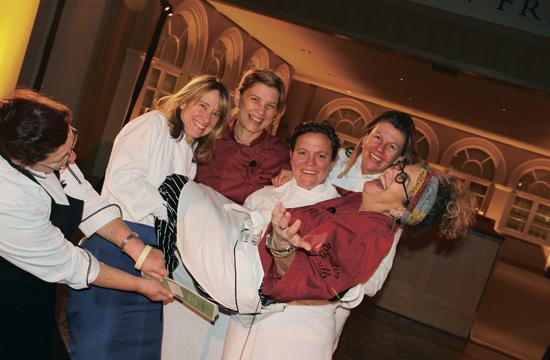 Some of Los Angeles’ best chefs will treat Women Chefs & Restaurateurs (WCR) Conference attendees and participants to the best food the region has to offer, when their annual event kicks off at Annenberg Beach House mid-April.

WCR began in 1993, with aim to becoming a resource to provide females in the food industry with scholarships, mentors, and networking opportunities.

The nonprofit’s annual conference – which takes place April 17 and 18 at the Intercontinental Hotel in Century City – will stick to the WCR’s original message, exploring topics and issues most relevant to women in hospitality.

Susan Feniger, one of the chefs and owners of Santa Monica Border Grill, will be among those participating in conference. Renowned chef Nancy Silverton, James Beard winner, will judge the Food Games contest. Food Network’s Waylynn Lucas and Ron Ben-Israel will host the “Women Who Inspire” awards gala at Paramount Pictures Studios on the New York Street backlot.

The Mirror spoke to participating Santa Monica delegates about the upcoming program and how to get ahead as a woman in the culinary field.

“The WCR conference plays such an important role in today’s culinary industry and provides an incredible opportunity to network with women from all across the country, listen to inspiring women talk about their careers, and support our peers. The idea of women coming together as a collective force in the industry is a truly unique aspect of the WCR.” – Susan Feniger, Border Grill

“As a founding member of the WCR, my career has been greatly enhanced by the many connections WCR has afforded me. Networking, teaching and mentoring young people has been instrumental in helping me define why I do things a certain way and allows me to share this knowledge with a new generation of chefs.” – Mary Sue Milliken, Border Grill

“When Barbara Lazaroff introduced me to the WCR many decades ago, it provided me and other women in our industry with a support system and networking opportunity at a time when we were seen as a novelty in our industry. It helped me to understand that ‘women really can do it all’.” – Bella Lantsman, Chinois on Main