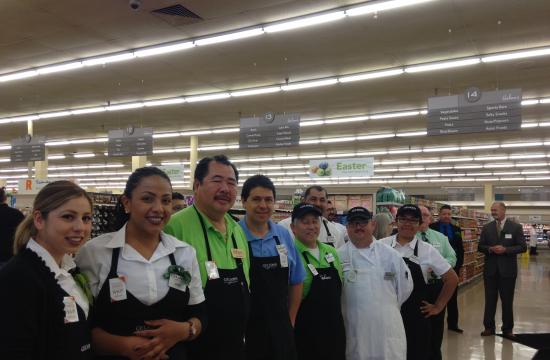 Hundreds of Santa Monicans were up bright and this morning, lining to be the first inside the doors of the city’s latest addition: Gelson’s supermarket.

Excitement filled the air as some took to the sidewalks for the giveaways (200 free goodie bags), others anticipating a reunion with old friends.

Mimi and Marcus lit up the moment their eyes reconnected, longtime pals from the previous two incarnations of the Ocean Park Blvd./Lincoln location.

Greeted with applause and cheers from staff members old and new, shoppers felt like rock-stars coming home as they entered the store, the wait worth it, if purely for the reception alone.

Gelson’s is a union store, so almost all former employees of Haggens, previously Albertsons, have been retained in the shift. Staff explained that they were well taken care of during the transition, with Gelson’s officials proud of their strong employment stance.

“We have about 100 employees, a mix of former Haggen employees from the Santa Monica store, new hires who did not work at the Santa Monica location, and current Gelson’s staff who transferred from other locations,” the store stated.

Councilmember Kevin McKeown snuck into the store before it opened, his exclamation of “being there because it was a union store!” meeting with a huge round of applause from staff.

President and CEO of Gelson’s Markets, Rob McDougall,asked everyone to be patient during the store’s opening phase, and that while not quite complete fixtures and fittings wise, they are ready to roll with a team of customer service, grocery, bakery, chefs, local brands and imported items all on hand.

“In short, Gelson’s will be the one store in Santa Monica where customers can try unique items, buy name brand favorites, experience full-service meat, seafood, and Service Deli items, and be served with a keen eye to service,” the store stated.