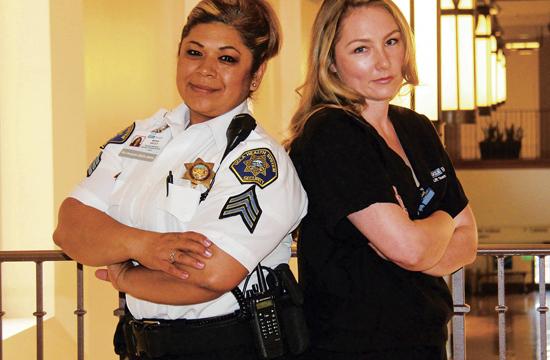 When a bedridden patient needs to be lifted or turned, or an unruly visitor needs to be escorted off the premises, the best man for the job at UCLA Medical Center, Santa Monica might actually be a woman.

Maria Arceo and Jennifer Martinez, both employees of the medical center, are powerful examples of women succeeding in jobs traditionally assigned to men.

Arceo, security supervisor on the 3pm-11pm shift, is part of the team responsible for protecting the safety of patients, visitors and staff. Martinez, at just under 5’5” tall, is a member of the Lift Team, which assists nurses and other staff in caring for patients with limited mobility.

“I’m the only female member of the team, but the others are always encouraging and offering to help me. At the same time, they don’t underestimate my ability,” said Martinez, adding that team members usually work in pairs. They often walk 7 to 8 miles a day making rounds to lift, turn, reposition and transfer hospitalized patients.

“Sometimes patients are apprehensive. We explain to them what we need to do and how we plan to do it, and they usually agree,” Martinez said. “If they’re hesitant, we may ask them if it’s okay to ‘give it a try,’ and tell them we’ll stop at any time they request. It’s important to give them that feeling of control and for them to realize that our sole reason for being here is their safety.”

When Martinez applied for a job at the medical center in 2015, she was offered a position on the Lift Team, a physically demanding job, but one she enjoys.

“I love it,” said Martinez, who encourages other women to pursue nontraditional jobs.

“Always have an open mind and be willing to do something outside your comfort zone,” she said. “It’s more about your mindset than your physical ability.”

Arceo, who has been with the hospital for nine years, stepped outside her comfort zone decades ago.

Her career in security services started in 1986 at County USC Medical Center and included seven years at Staples Center and two years at Dodger Stadium. At the sports venues especially, she found herself amid near-riot situations with alcohol-fueled, out-of-control crowd behavior.

“It’s not easy, but it’s very satisfying. Believe in yourself and others will believe in you. I’ve never had a male officer decline my help because I am a woman. Instead, we all work together as a team,” she said. “I hope that my being here will make it a little easier for other women to pursue careers as security officers.” In fact, UCLA-Santa Monica has one other female security officer.

At the medical center, Arceo’s job can both heartwarming and heartbreaking. Five years ago, she befriended an elderly patient whose family was out of state at the time of admission. When the patient’s husband arrived, Arceo noticed he wore the same clothes day after day, and she realized he probably had no time to pack for the trip. She bought some T-shirts for him and crocheted a beanie cap for his ailing wife.

One day, when Arceo was summoned to deal with a combative person, she found the husband directing his frustration toward the CT technician. When the man saw Arceo, he began to calm down. His wife died a couple of months later, and the husband made a point of contacting Arceo to thank her for all she had done.

“I know I can’t do everything,” she said. “But every little bit we can do to help others makes a difference.”