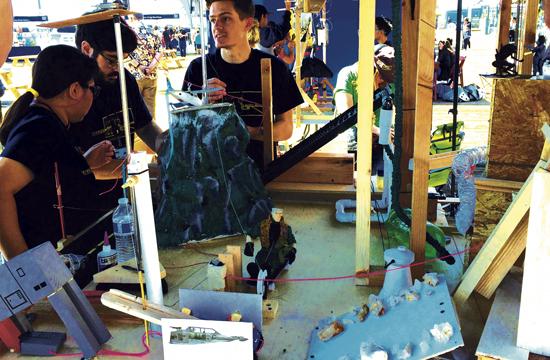 Named after the Pulitzer Prize winning cartoonist and inventor, the contest invites high and middle school students from LAUSD, Santa Monica, Venice, Inglewood ,and more to invent one of the intricate non-electric machines that perform simple tasks in a complicated fashion made famous by Goldberg.

This year’s task was to open an umbrella in a minimum of 20 chain reactions.

Covering the inside of the pier’s carousel and its south-east deck, the machines were joined by various booths promoting the day’s theme, such as a car presented by Samohi students that converts gas into electricity, a trash-for-recycling table, and a station with a large steampunk crane where children could lift up toys.

The main attraction, of course, was the myriad of ways that different teams went about the competition’s challenge.

Many machines took a pinball through a series of ramps and drops toward the umbrella-opening trigger. Some used tubes and pendulums and some were carved entirely from wood. Many artistically invoked their city by, for example, basing the machine on a floor of sand or designing a background of the Hollywood sign covered by trees.

Following the contestants presentations was a panel including Diana Skaar, Head of Business for X (formerly Google X), Kristina Kipp from JPL’s Mars Rover and L.A. robotics champion Cynthia Erenas. The panel and the competition were hosted by The Tomorrow Show’s charismatic Gary Bright.

Winners advanced to a national competition. Regardless of where they placed in the competition, what every student clearly demonstrated was the ingenuity of the Goldberg Machines and the degree of creativity and dexterity it takes to make them.