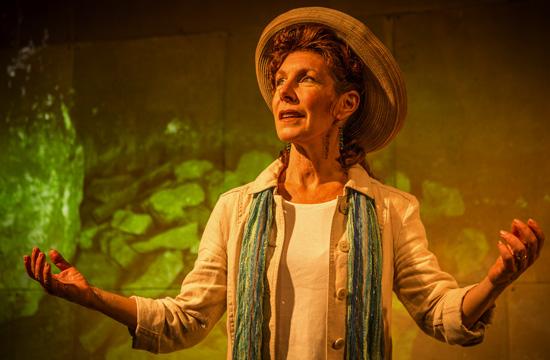 In the wake of Paris and San Bernardino, communities have been called on for resilience. In Santa Monica, a new play demonstrates the inner workings of that process.

Based on the book by Sherri Mandell that won a National Jewish Book Award, “The Blessings of a Broken Heart” traces the story of how Mandell grieved and ultimately healed after her 13-year-old son was killed by terrorists near their home in Israel.

The play, which began its run at The Braid on February 18th, has already won the Egerton Foundation New Play Award for its director and adapter Todd Salovey and The American Spectator called Lisa Robins’ lead performance as Mandell “astonishingly evocative” and a “must see.”

Explaining his interest in adapting the book into a play, Salovey explained that, “Sherri’s language and her imagery were like a bolt of lightning; in just two paragraphs I was riveted. There are so many parts of our lives – wounds – and so few pieces in the theater aiming directly at healing. This is one of the exceptions.”

In addition to being an award-winning author of fiction and nonfiction, Mandell began the Koby Mandell foundation, named after her son, to provide programs in Isreal for bereaved children and families. Before beginning her life in Israel, Mandell lived in Santa Monica working at a nursery school and a feminist art project. She feels the city’s unique support for arts and theater makes it ideal for the play’s aim of healing as well as entertaining. She also considers it a personal marker.

“When I got to Santa Monica to attend the play, I cried because it felt like my life had taken a giant looping circle,” Mandell said. “Being in L.A. again after so many years reminded me of how innocent I was then. It also reminded me what fun I had living in Santa Monica. Now my life has taken such a dramatic turn. Flying in from Israel for a play that told the story of my family’s life in Israel seemed like a painful honor – the fact of our tragedy, but moreover, the fact that our story was appreciated and recognized. Yes, I will always feel connected to Santa Monica.”

The play, hosted by the Jewish Women’s Theater (JWT), runs until March 20th on Thursdays and Saturdays at 8pm and Sundays at 2:30pm and 7:30pm. JWT’s artistic director and the show’s producer, Ronda Spinak, hosts post-play discussions with the cast, artistic creators, community leaders and trauma experts after each Sunday performance.