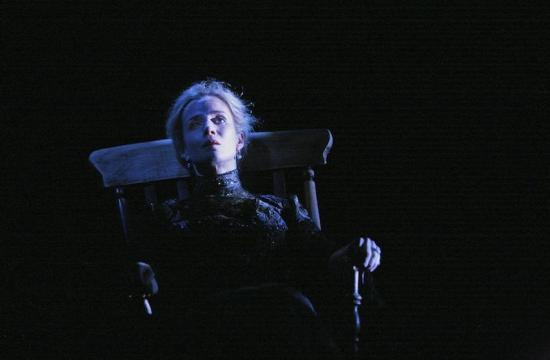 The Eli and Edythe Broad Stage in Santa Monica presents Irish actress Lisa Dwan, performing her internationally acclaimed “Beckett Trilogy” Not I / Footfalls / Rockaby for five performances only, April 7 through 10.

Dwan has become world famous in the recent past performing the works of Samuel Beckett. Her trilogy of one-woman Beckett plays has sold out all over the world from London’s West End to Hong Kong, Paris, Belfast, Cambridge, and New York, where she was described by Ben Brantley in The New York Times as “an instrument of Beckett, in that way saints and martyrs are said to be instruments of God.”

Dwan had been performing “Not I” since 2005, directed by Natalie Abrahami.  The Times of London said Dwan “turned what is commonly regarded as the hardest role an actor can tackle into a tour de force.”

Dwan was then specially coached by the late actress Billie Whitelaw into “Not I.” Whitelaw, who died last year, was long considered Beckett’s own muse and had been coached into the part by Beckett himself.

The program is completed with two other Beckett classics “Footfalls” and “Rockaby,” directed by Beckett’s close friend, assistant, favorite director and long time collaborator Walter Asmus, who suggested that these plays could be performed as a single program.   It is the first time this unique trilogy of one-woman plays has been performed by a single actress in one evening.

Please note that “Beckett Trilogy” is performed in complete darkness, including emergency exit lights (they are switched back on in case of an emergency).  The 55-minute performance includes a three-minute pause, again in complete blackout, between each of the three pieces.