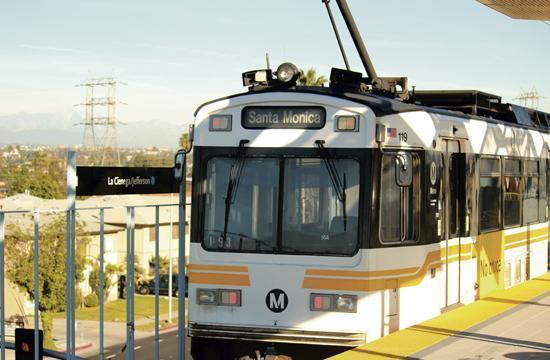 Passenger service on the Expo Line extension from Culver City to Santa Monica won’t begin until May 20, but trains began running on the route yesterday at 12- to 20-minute intervals to simulate full service as part of preparations to open the line. Jump aboard at the station.

The simulated full service means motorists near the route will encounter lowered rail-crossing gates more frequently. Trains will begin running as early as 4 a.m., and continue until roughly 2 a.m. Sunday through Thursday and as late as 3 a.m. on Fridays and Saturdays, according to Metro.

Trains have been running along the new stretch of track for months, but only on a limited testing basis.

With the trains now running at intervals simulating full service, Metro officials reminded motorists and pedestrians to obey warning signs and traffic signals when crossing tracks. Pedestrians were urged not to walk on the tracks, not to jaywalk across tracks and look both ways when crossing in crosswalks.

The 6.6-mile, $1.5 billion extension will stretch the Expo Line from its current terminus near Venice and Robertson boulevards in Culver City to a station at Colorado Boulevard and Fourth Street in downtown Santa Monica. The extension includes seven new stations, including stops in Palms, West Los Angeles and the area just north of Santa Monica College.

When the extension is opened, the Expo Line will stretch from Santa Monica to downtown Los Angeles, ending at the Seventh Street/Metro Center Station at Seventh and Flower Streets. Riders at that station can connect with the Blue, Red and Purple lines, taking them to Long Beach, Union Station, North Hollywood or the mid-Wilshire area.