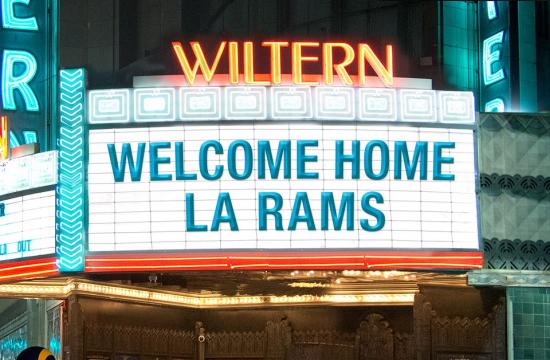 As the St. Louis Rams begin the tedious process of relocating to Los Angeles, there are a few distinct differences that they’re going to face. With many of the team members eyeing the Westside and a higher cost of living, the move affects more than the team’s wallets. The top paid players will be fine, but a move like this involves more than 50 employees and their respective families, too. Here are some of the biggest differences the Rams and their staff will face in moving to L.A.

Los Angeles tends to have a lower average air quality, due largely to the denseness of the city – L.A. houses about 18.5 million residents inside about 4,800 square miles. Comparatively, St. Louis is home to only 2.9 million people, living in about 8,800 square miles.

While St. Louis is home to four seasons, L.A. boasts a summery atmosphere for most of the year. Westsiders call our brief temperature dip into the 60s “winter” although the rest of the may would argue that’s fall.

The poor Rams are going from park critters and farm animals to the land of lions, tigers, and bears, oh my! For all its urban development, wildlife sightings in Los Angeles can include bears, hawks, mule deer, bobcats, mountain lions, snakes, and badgers.

Square footage is a huge commodity in crowded L.A. – in fact, the price per square foot there is 289.5 percent higher than in St. Louis. The Rams may have to look into a few storage units to accommodate that downsize.

Home costs jump nearly 3000 percent between St. Louis and Los Angeles! But when you consider that St. Louis is more rural, and L.A. touches Hollywood, the difference begins to make more sense.

With a higher cost of living come some surprises you may not expect, like the cost of everyday items. Not only will grocery shopping in L.A. be more expensive, but a night out on the town will, too. And while the differences seem small, think about an NFL player’s lifestyle – those costs over the space of a year can really add up.

While St. Louis may not be classified as an unhealthy city, they don’t have their own style of barbecue for nothing. A move to Los Angeles will mean a wider variety of foods that are readily available, including vegan and health-conscious options, more ethnic options like Mexican and authentic Japanese, as well as fad foods like L.A.- founded yogurt chains.

As you might expect in a city with only two seasons, Westsiders love our outdoor activities. Most L.A. nights, the Cinespia, 3rd Street Promenade, and numerous outdoor movie theaters are packed. Plus there’s hiking, biking, surfing, sun-bathing, and plenty of deep ocean adventures to be had in the area. The St. Louis Rams will be leaving behind their beloved Anheuser-Busch Brewery, though, and a classy number of museums, gardens, and zoos that are unique to Missouri.

The biggest difference in the Rams’ move for the rest of football-dom is simply this: it’s going to cost you more to get into the game. Not only will flights and hotels cost more, but you’ll be paying an extra $45 a ticket*. I doubt however, that this will keep Rams fans away.

*Ticket costs estimated based on current 49ers prices. Prices not yet determined for Rams tickets.

Jonathan Deesing works with movearoo.com. Movearoo is a collection of moving experts helping with everything from expert moving advice to competitive pricing on cable and internet packages.