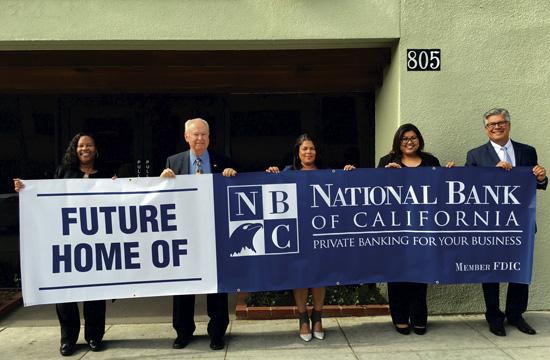 A strong team of experienced bankers have raised the banner on their new Santa Monica location, returning to the city to serve the community.

“Our banking team is looking forward to returning to Santa Monica and to the merger with Commercial Bank of California,” said Dick Lawrence, Executive Vice President of the new branch. “This combination with a BauerFinancial, Inc. five-star-rated bank will further support the increasing needs of growing companies in Santa Monica and on the Westside.”

The banking team has worked together for over 15 years serving the personal and business needs of clients on the Westside, and in particular, Santa Monica.

The branch officers are well-known in the Santa Monica community. Kathy Irby, Vice President, was Assistant Manager of the Boston Private Bank & Trust office before joining National Bank of California in Brentwood in June, 2011. She has extensive community service experience.

The combination of local know-how and professional services is shaping up to be a promising addition to the banking scene in Santa Monica.

“National Bank of California has a proud reputation for serving the business and personal banking needs of its clients,” commented Rick Mateus, Regional Vice President. “Also, our employees are very active in local non-profit organizations.”

Mateus has been at National Bank for six years. His 38 years of banking experience include serving as EVP and Chief Financial Officer (CFO) for Encino State Bank.

Jennifer Irizarry, Vice President, is a loan underwriter and business development officer. She has worked for the bank for six years. Chanthan Pom, Assistant Vice President is also a six-year employee.

For more information go to: nbcal.com.