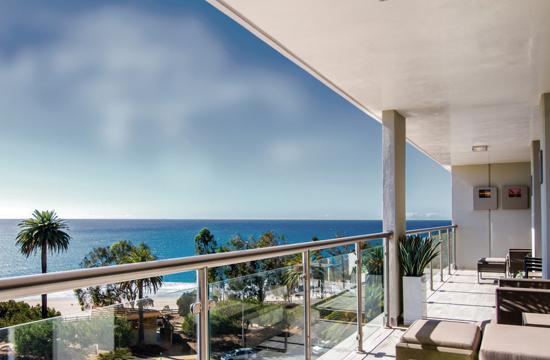 Santa Monica’s greatest sources of glamor – the ocean, entertainment and real estate – came together at the launch party for 201 Ocean Ave Saturday February 29.

Known as the “billionaire towers” the complex overlooking the ocean at San Vicente houses athletes, celebrities, and international businessmen. The real estate team seeking to sell a new slew of units is led by Ryan Serhant of “Million Dollar Listings New York” which was filming the event. (He also played “Hedge Fund Dave” in the film “While We’re Young”).

The 318 unit conversion highlights 1-3 bedroom units ranging from $1 to $5 million, most of which have an ocean view.

According to Serhant’s managing partner Sebastian Wolski, selling the residences amounts to “One of the biggest projects ever by any broker…Our total sellout on the first phase is close to about $80 million in sales.” The centerpiece of the launch event was a tour of the units themselves with the hope of selling their highest priced unit, a 1744 square foot two bedroom, three bath oceanside apartment valued at $4.7 million replique de montre.

Prior to the tour guests and potential buyers settled in with a live DJ and complimentary beverages from the event’s sponsors.

Wolski and other representatives of the Serhant team were unambiguous in stating both the profit-driven ends of the event and the superrich coterie they were aiming for. As Wolski said, “We want to get as many people interested in purchasing as we can.”

“You can’t beat it,” he added.  “It’s oceanside in Los Angeles, the tallest residential towers. It’s the best place ever.”