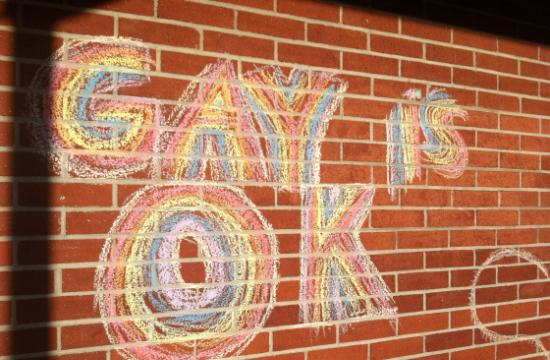 Hours after Los Angeles City Councilmember Mike Bonin’s introduction of a motion to offer a $50,000 reward in the case of hate-speech graffiti found at Palisades Charter High School, two students of the school were arrested Tuesday, allegedly responsible for the vandalism.

On Monday morning, numerous symbols and phrases that referenced the Ku Klux Klan, and made derogatory references to Jewish people, African-Americans, and members of the LGBT community, were found on City property outside the campus, on the school’s signage and defacing a school mural. Los Angeles Unified School District Police officers believe the graffiti was spray-painted on Sunday night or early Monday morning. According to school staff, surveillance videos show a person wearing a red beanie and a white mask spray-painting the property.

Upon arriving to school Monday morning, faced with spray painted words of hatred and intolerance, the Pali High community fought back.

On Monday, about 300 Pali High students staged a peaceful protest in response to the incident, gathering on campus to meet with school staff and demand that a swift investigation take place. The students additionally countered the hateful graffiti by sketching messages of love, tolerance, and acceptance around their school in chalk.

Lunchtime murmurs about the arrests Wednesday oscillated between satisfaction and a lingering uneasiness, according to Pali High students.

“What happened at Pali is terrible, but we are staying strong,” senior AJ Vaatete, 18, told Westside Today. “My teachers haven’t really talked about it. A lot of people are upset but happy that they caught the people who did this.”

Principal Pamela Magee advised students and parents that there were no threats to the school, which police reiterated in a statement issued late Tuesday.

In a letter to parents and guardians Monday night, Magee explained that students were dismissed for three class periods for an “impromptu assembly,” free to voice their feelings and concerns about the crime with administration and peers. The protests turned into “a very constructive, respectful, and orderly discussion,” according to the principal.

Councilmember Bonin said he was “horrified by the awful, disgusting and offensive hate speech graffiti” left around the school.

“We cannot allow hate and intolerance to threaten our neighborhoods and our schoolchildren,” he said. “I join friends throughout the Pacific Palisades, the Westside and all of Los Angeles in condemning this disgusting vandalism.”

The arrested students were released to the custody of their parents Tuesday evening, Los Angeles Police Department Lt. Tina Nieto said. Because they are juveniles, their names will not be released.

Detectives conducted an extensive series of interviews, leading to the arrest of two suspects, police said.

“More work remains to be done but I believe we are ending this difficult day in a much better place than where we began it, and have more clarity on how we can continue to improve the environment for all students at our school,” Magee said.

Anyone with information that could help the Los Angeles Police Department is encouraged to call the Crime Stoppers hotline at 800.222.TIPS (8477).

As almost everyone in our community is now already aware, there was a very disturbing graffiti incident in the pre-dawn hours of Sunday morning involving hate speech and symbols being spray-painted on a number of highly-visible walls and murals in front of our school. Since this was reported, Pali administration has been working closely with law enforcement and school staff to implement a comprehensive response to the situation which so far has included the removal of the offending material and a vigorous (and ongoing) police investigation to identify the perpetrator(s) and bring them to justice.

Additionally, this morning, after announcements went out to all students to recap the events that had taken place and to invite students to communicate as openly as possible with administration to support us in the ongoing investigation, we began to hear from a number of students that, in lieu of attending all their classes today, they felt it would be helpful to be able to spend some time in an impromptu assembly setting where they would have a opportunity to voice their feelings and concerns about what had happened and have a dialogue with each other and Pali administration about how we can work together to eliminate this sort of damaging language (and the attitudes behind it) from the Pali environment altogether. To facilitate this conversation, a decision was made (and announced) that any students who had serious ideas to contribute to this dialogue would be excused from class without attendance consequences, although students will be required to make up any work missed.  We do have an automated call-out system notifying parents of absences which did report all the absences to parents today, but we would like to reassure parents and students that despite these calls, administration’s commitment not to penalize students who participated in today’s discussions will be honored.

In the end, we had a very constructive, respectful, and orderly discussion involving about 300 students across today’s three class periods, capped with an opportunity for students to leave positive, healing messages in colorful chalk drawings in the same highly visible areas of the campus which had been defaced over the weekend.  More work remains to be done but I believe we are ending this difficult day in a much better place than where we began it, and have more clarity on how we can continue to improve the environment for all students at our school.  We will keep you informed of any further developments that are positively or negatively affecting our school climate as we continue to respond and heal as a community from this difficult episode.