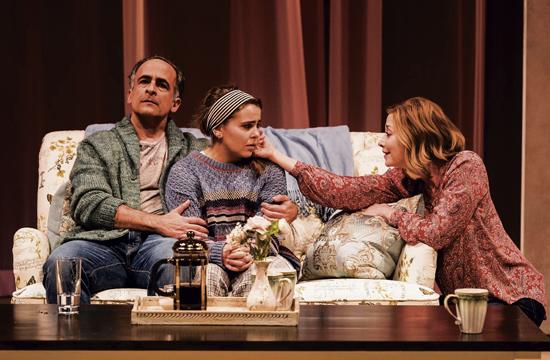 With elevator-type music playing, the interminable Act 1 opening scene begins at a college somewhere in the south. A most strident Mae Whitman’s character of Charlotte, along with her life-long buddy and college roommate Jonny, played by York Walker, are preparing a dinner for her parents, which consists of salad and bread, sans butter. Sharon Lawrence, who punches the sit-com type laugh lines, plays her heavy drinking, pot-smoking mom, Lucinda, who seems to be in a fog most of the time. David Pittu as Howard, Charlotte’s dad, also falls into the trap of playing for laughs. There are multiple jokes about the makeshift table and tablecloth, which is actually a sheet. Howard makes such a fuss about the lack of butter that Jonny volunteers to go buy some.

During Jonny’s absence, her parents grill her about her relationship. Charlotte hints that they are serious. Her dad reminds her that she passed on going to Yale and when he saw he was upsetting her, he backed down saying, “I never met a single person who went to Yale who wasn’t an asshole.” Asshole is always good for a laugh. Howard is a successful novelist who writes cheap detective stories. At one point Jonny asks Howard if he could interview him for a term paper. The eventual outcome isn’t exactly what Howard expected. One could argue, however, that Howard’s multiple trips to the bank more than assuages his guilt feeling of not writing the great American novel. Amidst all the one-liners, mom turns to Charlotte and says, “Listen honey, grandma die.” A big non-sequitur laugh.

Jonny, who is African American and Charlotte, a spoiled Jewish princess, have been friends since they were children, but they never crossed the line into becoming lovers. She decides that they should have sex and strips off all her clothes standing there naked as a Blue Jay. She jumps into bed and waits for Jonny to join her, shouting “Get over here and @#@**& me right now.” Jonny declines leaving her stranded naked in bed saying no for two reasons: 1) She’s drunk and it would be like date rape, and 2) He’s seeing a girl named Monique. Being a Baptist, he claims he’s saving himself for marriage. Or is he? So, instead of sex, they dance. Here’s a shocker.  Jonny has a sense of rhythm while Charlotte dances like someone who is physically and rhythmically impaired. Eventually, he finally fesses up to being gay and confesses that he had sex with a man. One of the few lines with any honesty, Charlotte wants to know why he never told her. “I didn’t tell you because I didn’t want it to be true.” Later on, they have a confrontation in Charlotte’s back yard at which time he says, “You make being your friend a job.” A word about the back yard: Sorry, but when two large branches with dead leaves were lowered indicating the backyard, I couldn’t help but laugh at Takeshi Kata’s set design, which are usually quite wonderful. I don’t know if it was intentionally comical but one has come to expect a certain level of excellence in set designs at the Taper. I accepted the minimalistic designs of the other scenes, which the cast executed in choreographed rhythm. The rest of the technical team consisted of Karl Fredric Lundeberg’s uneven original music and sound design, and Rui Rita’s adequate Lighting Design.

As we move through the mire of slick laugh lines, we find out that Jonny’s mom is quite ill and Charlotte is having a sexual identity crisis. She has a crush on a girl named Claire, a macho-type woman with a shaved head. Poor Charlotte. Vagina or penis? Eventually, in a contrived piece of direction, Jonny, too, strips down declaring, “This is who I am.” Not sure what being naked illuminates who he is, but I suppose it’s an eye-catching theatrical device. That said, there is one very authentic comical moment by an actor with a walk-on role.

After all the go-for-the-laughs in Act 1, Act 2 does a 360 from sitcom/soap opera to sometimes high drama. Let’s sum it all up. A year has passed, and what a year! Charlotte has broken up with Claire. She is going to marry Martha who is a doctor. Mom’s advice: “There’s nothing to be nervous about. You can always get a divorce.” Jonny’s mother has died. He is in love with a pilot, and has volunteered to be the sperm donor for Charlotte and Martha. Mom and dad have split. Dad has a girlfriend named Carol. Jonny has gotten an advance on a book deal. Howard does not receive the news in a warm way as the book is based on an analysis of Howard’s characters, which is not very complimentary.

While you can’t hold a director responsible for the script, you can hold him responsible for the direction. Robert Egan’s direction highlighted the weakest part of Doran’s writing pandering to the built-in laugh lines and going for the shtick.  He did not reign in Mae Whitman’s vocal performance, which consisted of a whole lot of yelling. Perhaps the most honest performance came from York Walker who delivered an unencumbered performance without using a bag of acting tricks.

At one point, after over indulging Charlotte since she was a baby, dad says, “Jesus. Having kids is exhausting.” My sentiments exactly about sitting through this play.