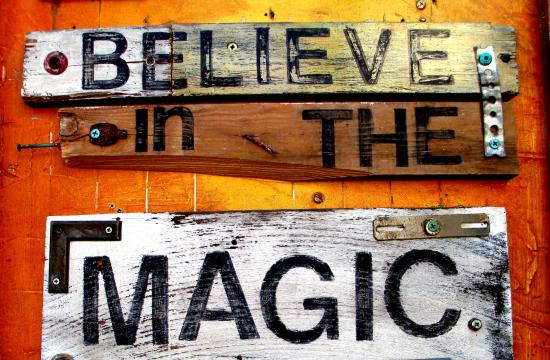 Santa Monica’s Edgemar Center for the Arts welcomes two local artists – Jennifer Verge and Stephanie Visser – at a reception this Sunday, March 6th. Verge’s exhibition “Believe in the Magic” will feature her works on wood. “Rhapsody in Blu” spotlights the abstract paintings of Stephanie Visser.

Verge is a mixed media artist who works primarily on wood. Although she has used canvas in the past, once she began painting on wood, she never looked back.

Verge was recently motivated to create a new series of work. “I had the pleasure of being invited to the home of an incredibly successful couple. Their home was stunning,” Verge said. “They had amazing art all over their home, and it was decorated to perfection. In one of the rooms, I noticed a small frame that had the inscription ‘Believe in the Magic.’” She later found out that the couple lived in a small apartment in Santa Monica prior to their success, which inspired her new series.

Verge said the she was inspired for another work in the show by the idea of common threads in people.

“‘You Make Loving Fun’ is one of my favorite paintings,” Verge explained. “If there is a thread that connects everyone I love…It would be this statement, because these are the people who make me feel alive.”

Visser told The Mirror that she is excited about showing a collection of pieces all honoring the color blue, aptly named “Rhapsody in Blu.” Originally from Michigan, Visser came to Los Angeles to pursue her art and has made it her home for the past 13 years.

Last summer, Visser was invited to do a show in her hometown of South Haven, Michigan, which is scheduled to open summer 2016 in June. The theme of the exhibition there, “A Returning,” will feature the work of four Michigan born established artists who have built careers in other parts of the United States.

“It’s somewhat the prodigal son theme, but we are all experimenting with how growing up in that locale has influenced our work,” Visser said. “‘Should be interesting. My series in the show is called “Querencia,” which describes a place where one feels safe…a place from which one’s strength of character is drawn…a place where one feels at home.”